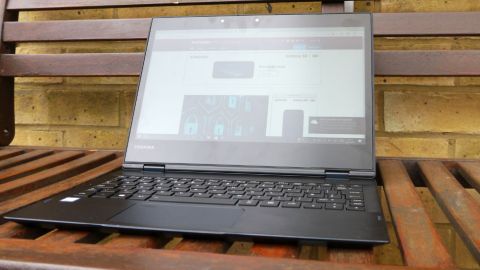 The Toshiba Portégé X20W will appeal to those looking for a laptop that can last all day long, and deliver some serious computational power while weighing almost nothing. It is expensive, but that won’t be a problem for the target audience.

It is difficult not to be amazed by the strides made by laptop manufacturers over the past few years when it comes to improving the general aesthetics and the size of notebooks. Indeed, this has happened to such an extent that Ultrabook-sized laptops have become the norm, making the term all but superfluous (interest in the term, according to Google searches, hasn’t been this low since it was first coined in 2011).

Toshiba’s Portégé series represents the company’s top of the range ultra-portable models. The X20W-D-10V (about £1,700 at BT Shop) is the 2-in-1 convertible candidate, which the Japanese manufacturer claims is the thinnest and lightest 12.5-inch business laptop with an Intel Core processor.

We’ll just stick to very light and very thin. The Z20t is its detachable alter ego with the Z30 series being the more traditional model with a fixed screen.

Toshiba opted for a brushed onyx blue finish throughout the laptop, perhaps the best choice to enhance the look of the magnesium alloy chassis.

We detected a tiny amount of flex on the screen but not on the chassis or the keyboard. Speaking of the latter, this gets little wrong despite its smaller size. The keys are smaller but still offer ample spacing, and while the feedback was sharp, there was enough travel (as usual, your mileage and personal tastes may vary).

The SecurePad touchpad has a fingerprint sensor located at the top-left of the active area and can be used with Windows Hello, a TPM 2.0 chip and an infrared camera with dual microphone to provide a more secure environment.

We found the touchpad comfortable and responsive to use, with an audible click when pressing on the lower corners to activate the left and right mouse buttons.

As expected, the display, which is held in place by two hinges, in the style of Lenovo’s Yoga devices, has a fairly large bezel – which is where you’d expect the user to position their hands – and uses a matte finish to minimise glare when outdoors. That also helps eliminate fingerprints as well, and surprisingly, Toshiba used Corning Gorilla Glass 4 technology here.

Toshiba also offers a number of accessories to maximise your productivity. These include a travel dock, a Thunderbolt 3 dock and a protective sleeve with an integrated pen holder. Yes, this laptop comes with an AES active stylus – from Wacom – but doesn’t include a slot for storage on the chassis itself.

Other than the sheer svelte dimensions of the X20W, the other thing that will wow is how small the power supply unit is. It is so small (60 x 60 x 27mm) that it could (and should) have been integrated with the plug.

It is a multi-voltage PSU, capable of powering your laptop or your smartphone (5V@3A, 12V@3A and 20V@2.25A) via a USB Type-C connector. This power supply – and the aforementioned accessories – actually help mitigate one of the biggest issues associated with laptops of this size, namely the lack of connectivity.

The device only has one USB Type-C/Thunderbolt 3 connector and an audio port on one side, and a full-size USB port on the other. There are no card readers, for example, and you lose the USB Type-C connector when you plug in the laptop (via that port).

Wireless communication is provided courtesy of an Intel AC-8265 chipset (that offers 802.11ac Wi-Fi and Bluetooth 4.2).

Audio is handled by Harman Kardon DTS technology but don’t expect any surprises here. The laws of physics mean that the sound – which comes from two tiny speakers located underneath the palm rest – is nothing in particular to write home about, but it’s decent enough for the most part.

In use, we found the laptop mostly cool to the touch, even under load, thanks partly to Toshiba’s new hybrid air cooling system. Running our usual benchmarks with the laptop, we found the results in line with what we’d expect from such a system bar one anomaly.

On a number of graphics benchmarks, we found the HD 620 graphics subsystem to be significantly underperforming compared to, say, the HD 615 found on the Teclast X5 Pro. For example, the latter managed twice the FPS count compared to the Portégé.

Unless you are a gamer, this shouldn’t matter much, but we find it troubling that there is such a massive gap in performance – and this was an issue that affected the graphics-related parts of all the benchmarks we used.

Note that a charge-through, Type-C to HDMI connector, is also included in the package.

Toshiba claims that the 3-cell battery should last for 14.5 hours (that’s 870 minutes) using MobileMark 2014. Running our standard test (50% brightness and playing a count-up video from YouTube), we stopped at 8 hours 16 minutes and still had 26% of the 45Whr battery left.

The Portégé X20W-D-10V runs Windows 10 Pro, comes with WinZip (yes, WinZip) and a one-year collect-and-return warranty in the UK (and carry-in warranty across EMEA).

There’s plenty of competition for the Portégé: Dell has the new XPS 13 2-in-1 which has a couple more ports (including a card reader) and an optional higher-resolution screen.

Sadly, it uses a Y-series Core CPU and doesn’t have a full-size USB port. HP’s EliteBook Folio G1 might not be as thin or light as Toshiba’s laptop, but it does have a three-year warranty as standard as well as a long battery life, a marginally lower price and far better connectivity.

However, Lenovo’s ThinkPad Yoga 260 remains this machine’s most potent rival – it also comes with a digital pen and a 12.5-inch form factor, plus the ability to add a 1TB SSD and a smart card reader.

So should the Portégé X20W-D-10V be on your shortlist (or in your buying basket)? The answer is yes if you are looking for the tiniest, most compact and portable convertible laptop. This Toshiba laptop comes at a premium (just under £1,600 in the UK – that’s around $2,050) but the price tag is justified given what nestles inside.