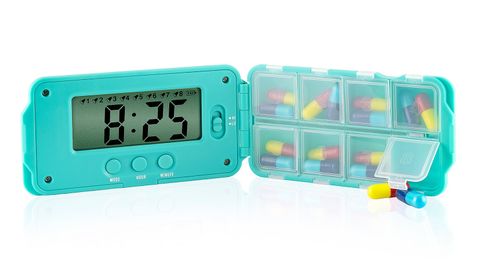 What this device provides isn’t anything amazing, but it’s very helpful for some people who need a little help in maintaining their pill regime. It doesn’t control access or direct those pills to take, but it will alert with sound and light that it is time for dosage.

It’s almost a certainty that once you get past a certain age that you’ll be on medication, and for some failing to take it can have dire consequences. And, excessive medication can be an even more serious scenario.

On paper, a bill box that alerts you when to take your pills, so you don’t need to remember sounds ideal. But is the TabTime Super 8 truly suitable for someone suffering from Parkinson’s, or similarly debilitating condition?

The TabTime Super 8 can be found in most regions through a range of outlets and online retailers. We found it for $24.95 on the Amazon.com and £22.99 on Amazon.co.uk.

At this relatively low price, the TabTime Super 8 was never going to be anything sophisticated, and it isn’t.

What it offers are eight compartments for medication, combined with an LCD panel in the lid that shows the time, and that clock drives an alert system to alert the owner to take their pills.

There are only three buttons on the inside of the lid to set the time and up to 8 alarms per day, although it is worth noting that if a receptacle contains three pills of different types, it doesn’t have a way to say which one to take.

But, it does have an audio alert that lasts for 30 seconds, and the lid has a flashing LED that stays lit until it is opened.

For someone with failing memory, some additional information near the TabTime telling them what colour pill to take at what time will be required to avoid dosage mistakes.

Each compartment holds about five typically sized pills, but it could hold more if they’re very small.

Exactly how you use the eight compartments is up to the owner, because for those with lots of medication that need to be taken throughout the day they can be used to separate up to 8 doses, or you can use it as a weekly control for those with just one or two medicating sessions per day.

The limitations of this device are somewhat obvious, but we’ll outline them.

What it doesn’t do is control access to the medication, enabling the owner to take as little or as much of the contents without restraint.

That might not make it suitable for some, especially if they are using very powerful drugs where the exact dosage is critical.

There also isn’t anything stopping the lid being opened to cancel the alarm, but the contents remaining inside, unconsumed.

And, the final concern is that at only 5 x 2.5 x 1.4 inches (11 x 6 x 3 cm), the pill receptacles are rather small as are the catches to open them. Opening them and extracting the contents might prove difficult to those with arthritis in their fingers, as the covers are small, and require a degree of dexterity to unlatch.

Looking at most people who bought these they mostly seem happy with what they do, even with the previously outlined limitations.

While this isn’t a device that’s suitable for all those taking daily medication, for many who need a regular and managed regime, it can work well.

Those with Parkinson’s and other memory loss issues can find the audio reminder and then flashing LED on this unit very helpful prods to take their medicine.

But honestly, anyone over 55 years might find that the TabTime Super 8 gives a welcome nudge to those who often forget to take pills.

It’s also a strong help in providing a repeatable pattern for those that like the same things happening each day, at the same time.

The small size and inherent portability are also useful for those that travel or move from one location at night to another in the day.

There are several similarly priced products, like e-Pill, that do much the same thing, but we liked the very clear LCD display on this one. And, this has eight pill compartments, and e-Pill has only four, making it suitable for daily use only.

Where it probably won’t work well is with those who tend to unpredictable behaviour combined with a prescription for very strong medication. They might require controlled dispensing, and this device doesn’t go that far.

The cost isn’t high, but it is more than a simple pill dispenser. We suspect that if TabTime could make these under $20, then they’d sell many more, and possibly more than one to some customers.