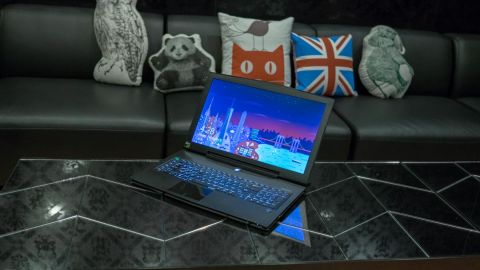 Aorus has successfully put a hardcore gaming laptop into a chassis less than an inch thick, proving that you can indeed enjoy a high-performance machine that isn't a brick. That said, the X7 Pro has made more than a few concessions to achieve this slim form factor, including heat and battery life.

Aorus has done a great job building a machine that matches function with fashion. The exterior feature thin vents on almost all it sides to help pull in fresh air and exhaust heat while making the machine look just a bit cooler at the same time.

The Aorus X7 Pro has also proved to be one of the best performing machines we've ever tested. It absolutely crushed it in our suite of benchmark tests, setting all sorts of new records. In real world gaming, it easily plays modern titles at 1080p with all the graphical flourishes set to ultra.

While this machine is easily one of the most capable gaming laptops we've ever reviewed, it's also one of the hottest and loudest. We've had a few machines with loud fans such as the Origin EVO15-S. The X7 Pro, however, is on a whole other level, as the machine sounds like a leaf blower on full load. The system also gets uncomfortably hot, even when simply web browsing and streaming video.

Between the heat making this laptop absolutely uncomfortable to put on your lap and the short two hour battery life, this is a machine you'll rarely be on the move with. The real shame of it is this laptop was designed to be lighter and thinner than most gaming laptops, making it easier to take out, but all its faults will make you reconsider this decision.

The Aorus X7 Pro easily stands out of the crowd of oversized gaming laptops as a much thinner and lighter machine. These rigs are often called desktop replacements not only for their size but also the amount of performance they can deliver. Recently, though, laptops have been getting thinner from Ultrabooks to workstations to gaming laptops - now, a 17.3-inch laptop has joined the trend.

For the most part, the X7 Pro succeeds but stumbles hard while doing so. Thanks to the Nvidia dual 970M setup, this machine easily outpaces Alienware 18 I reviewed last July, a massive gaming laptop that costs nearly double the amount and is also twice as thick compared to Aorus' thin mobile gaming offering. Even the similarly priced MSI GT72 Dominator falls well short of the X7 Pro even with a Nvidia 980, the best mobile GPU on the market currently.

If you can look - and hear - past Aorus X7 Pro's flaws, it's an amazing piece of mobile PC gaming hardware for seriously premium price.