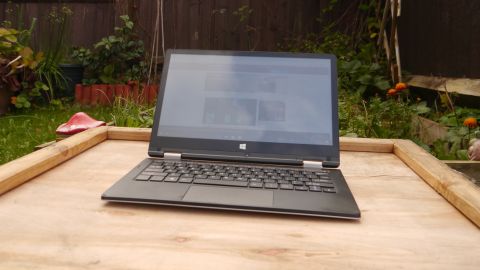 The Y1102 will suit those looking for a versatile, portable device that can deliver on light workloads – emailing, a couple of presentations and editing a document. The small size of its screen and poor keyboard will make everything else a struggle.

Way back in January of 2007, TechRadar published a review of a laptop called the GoBook. Nearly 12 years on from that, we’re checking out another GoBook laptop (not from the same company), the Y1102, which at less than a fifteenth of the price of its predecessor, provides another interesting take on the small form factor by embracing a Yoga-like convertible format.

Online Chinese retailer, Lightinthebox, sent us the review model and sells the GoBook Y1102 for around £165 ($215) at the time of writing. Note that, while this price includes delivery, it is exclusive of any taxes that may be levied by HMRC or the courier companies on behalf of the vendor. Want to buy tech from online Chinese retailers? Read this first.

One thing that you immediately notice upon holding the Y1102 is the feel of its surface. It is rubbery – identical to the material used by the Lenovo Yoga 2 Pro and a clear personal favorite for us, compared to boring polycarbonate plastic and cold metal. Sure, it doesn’t look as sleek but it does improve grip.

The inspiration from the Lenovo Yoga range, more specifically the Yoga 11S, is obvious. Like the latter, the Y1102 is a full convertible, offering the four positions popularized by Yoga devices (laptop, stand, tent, tablet), thanks to a screen that can rotate 360-degrees on its axis via two hinges.

The other thing that’s immediately obvious is how small the Y1102 is. At 278 x 189 x 17mm and weighing 1.1kg, it is as small, if not smaller, than many similar-sized netbooks with whom it shares its form factor.

The Y1102 has a much smaller bezel than we’d expect (11mm on three sides), partly achieving this feat by moving the front-facing camera onto the thicker bezel, below the Windows home button and between the two hinges; which is a good idea, although pictures will be less flattering.

The power socket, a USB 3.0 port and a mini-HDMI connector are located on the left side, while the audio port, USB 3.0 connector, a microSD card slot, the power button and keyboard lock can be found on the right side of the laptop.

There are three status lights (Power, Num Lock, Caps Lock) located near the left hinge, and two speakers plus four rubber feet on the base.

Here is the GoBook Y1102 configuration sent to TechRadar Pro for review:

Fortunately, the display was spared as the engineers opted for an IPS screen, a Full HD touch model. As you’d expect, the keyboard performance was sub-par given how cramped together the keys are. 13.3-inch remains the minimum form factor to enjoy an optimum typing experience, especially if you plan to touch type for prolonged periods.

The touchpad is marginally longer than a credit card (it is exactly the same height) and has no physical buttons.

One word about the power adaptor supplied: it has a proprietary connector and the brick looks like a traditional smartphone affair, a 5V2.5A/12.5W model, which charges the small 8Whr battery.

GoBook has missed a trick here as it could have used a microUSB connector instead, something which may have allowed users of the Y1102 to charge their laptops using a host of solutions on the market including their own smartphones (and countless emergency power banks).