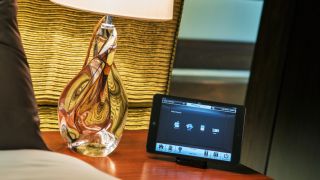 Apple has made its mark in pockets and on desks across the globe, but the company that many consider to be the world's most valuable brand has now set its sights on the home. Cupertino's highly anticipated HomeKit is already influencing the home automation market, even at this early stage.

HomeKit, first mentioned when Tim Cook introduced iOS 8 last year, is a system that will allow developers to make devices that connect to your Apple products, including your iPhone and iPad. It is an important milestone in the realisation of the Internet of Things (IoT), which is when household devices, and not just people, are connected to the internet.

The phrase is a buzzword of the moment partly because people are excited by the implications this has for our everyday lives, and partly because it represents a barely touched market of every internet-connected household (and their appliances) in the world. With the stakes being so high, it's no wonder that smaller businesses, including developers, startups and hardware manufacturers, are keen to follow Apple into uncharted territory.

How does Apple benefit smaller companies?

Smaller developers, companies and hardware manufacturers look to Apple because of its stability. They know that the Apple ecosystem will still be in place for many years, so that any products they create will have a live market waiting for them. It's the same strategy that we have seen with the App Store – developers are confident that people will continue to buy iPhones, so they feel confident enough to develop apps.

Not only that, but a cyclical effect kicks in. Developers build apps because people buy iPhones, people buy iPhones, in part, because there are a number of high quality apps in place that improve the iPhone's value as a product. It's a relationship that benefits both parties and has led some developers to be fiercely partisan towards Apple as a company.

Some companies that have emerged ahead of the pack include VelvetWire, iDevices and Litehouse.io. Some are headed by former executives of major companies – think Amazon and Intel – who have sensed a rare opportunity to go for gold. These companies are working hard to become an essential part of the system, so that when HomeKit is released, or even before then, they'll have products that they hope will prove indispensable.

iDevices in particular scored a marketing coup last year by claiming to have invested $10 million (around £6.6 million, AU$12.3 million) into its HomeKit project, a claim that remains unsubstantiated.

Home automation is still in its infancy. Whilst what is technically possible is already very impressive, there are still significant barriers to the widespread consumer adoption of home automation.

The first is usability. What is true of smartphones, and was true of desktop computers before, still holds true today: if something is difficult to learn how to use, a majority of users won't invest the time needed to learn how to use it. Apple's major success with the iPhone is not only down to designing a phone that is functional and good looking, it's also due to the fact that iPhones are simple to use.

The other obstacle that they need to overcome is integration. Without a dominant player on the field, industry standards are yet to emerge, leading developers to experiment with a number of different networking protocols.

This has had the unfortunate consequence of making home automation more complicated, and consumers who lack the assistance of a professional installer have found it nearly impossible to make devices from different manufacturers communicate with one another. A system that requires one app for lighting control and another to operate your speakers is too complicated to see widespread adoption. It also runs the very real risk of ruining the reputation of home automation if consumers start to complain about complexity.

Neither consumers nor manufacturers are happy with the current situation in which many brands have already gone out of business. These defunct companies have left a mess of devices behind them that have little longevity and no hope of being connected to future networking protocols. Users unable to afford a professional installation need to be able to take a product out of the box and have it work without too much tinkering, which means that device also needs an intuitive interface. And these are fields in which Apple has already proved its excellence.

It's also fair to assume that Apple will have the chance to standardise and simplify things through HomeKit by enforcing its Made For iPhone (MFi) license. This means that developers looking to receive MFi certification can expect a certain amount of help from Apple in terms of hardware components and technical support, provided that they comply with Apple's terms and conditions.

This will enable Apple to do some quality control, allowing them to revoke the MFi in cases where developers and manufacturers fail to meet the quality expected of them. By providing some of the tools, Apple can also raise the standard of devices overall by removing the need for developers to reinvent the wheel each time they want to build something for HomeKit.

Current page: Introduction and the need for stability