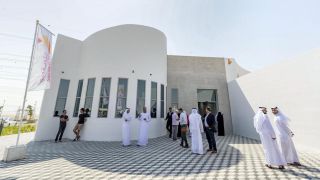 The largest 3D-printed building ever constructed has now been finished over in the United Arab Emirates.

More specifically, the building in the Al Warsan area of Dubai has been recorded in the Guinness World Records as the first ever two-storey 3D-printed building, and the largest one in the world by volume.

Dawoud Al Hajri, Dubai municipality director general, told The National: “This project is a major turning point in the construction sector. 3D printing technologies in construction will increase the speed of execution and [result in the] completion of buildings in record time.

“This will reduce construction costs and contribute to the development of solutions to demographic challenges by reducing the number of construction workers.”

The building – which is 9.5 meters tall and has an area of 640 square meters – used half the normal number of workers, the report in The National states, and produced around 60% less waste than traditional construction. It’s estimated that it will cut construction costs by something like 60%, too.

It was built on-site by a 3D printer as you can see in the video below, and naturally it meets all the relevant construction standards. Various curves and more awkward shapes were used in the architecture, as you can see, to truly test the printer’s capabilities.

Indeed, Emaar Properties – which was responsible for the Burj Khalifa, the tallest building in the world by far – is planning a range of 3D-printed homes in the Arabian Ranches III development in Dubai. The idea is that customers will be able to “design, download and print” their own perfect home.

Elsewhere we’ve seen innovative uses of 3D printing in construction including a project to build eco-house communities, with the homes themselves fashioned from mud (among other materials). This is all about maximizing sustainability, and minimizing waste, and in the future we could see autonomous eco-cities built along such lines – or at least that’s the vision.

3D printing has many diverse applications, but it seems to be increasingly clear that construction will be a big part of the future for this technology.