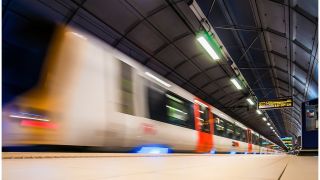 UK commuters have never had it easy, as weather disruptions, signal failures and overcrowding all lead to unforeseen delays or cancellations to the UK rail. Yet, the industry continues to boom as more than 1.759 billion journeys took place between 2018 and 2019.

Despite this significant continued growth, it seems that delays will be an ever-present challenge for the sector. In fact, research from consumer group Which? Unveiled that UK rail passengers lost an estimated 3.9 million hours to delays in 2018.

Using data analytics it was found that more than 8.1 million journeys within the year and, as well as how many hours commuters were delayed, it found that an additional 660 trains were cancelled altogether - the highest figure for cancellations since comparable records began in 2011.

Adrian Thompson is the Global VP of Marketing at SAPPHIRE Technology.

As technology continues to evolve, so has the need for more sophisticated computers and mobile app development. When it comes to travelling, there are a lot of waiting points and it is essential that passengers are provided with up-to-the-minute updates. Typically, transport organisations require commercial graphics solutions with low power consumption to maintain their information boards, in addition to enhanced stability, flexible multi-screen outputs and a low profile form factor.

GPU’s are being embedded into digital signage displays and interactive kiosks in order to provide high-quality visuals and create engaging, informative experiences. Due to GPUs’ ability to react rapidly, live updates are able to be provided and as a result, are able to reduce the perceived waiting time for passengers.

As the rail sector is working to put measures in place that minimise delays, it should also take into account whether they are using the best communications for passengers to not only inform them of any delays or cancellations but also help them find alternative routes using their departure and information boards. Additionally, there has been an upward trend towards larger digital signs, in order to make text clearer so it can be viewed from further distances, and as a result, avoid overcrowding.

Whilst many commuters would accept delays as a regular occurrence, research into the long-term effects on stress and mental wellbeing of regular delays is already taking place. Recent research highlighted that amongst 2,000 UK workers, 43% think their commute negatively impacts their stress levels, increasing to a shocking 73% among 25-34-year-olds.

Digital signage is not only a way to streamline efficiency but also to improve the commuter experience. Creating an improved experience will also contribute to customer loyalty that will see them coming back again and again.

As we are growing more familiar to a digitalised world, digital signage is also expanding, with the market expected to reach more than $32 billion USD by 2032. With the rail industry being such big business, one of the biggest pain points for commuters isn't just when trains are delayed and cancelled, but not having access to the latest updates on station platforms.

Rail organisations can utilise the best displays and display technologies to keep travellers updated with the latest journey updates to keep them moving. Not only is digital signage being used for live updates at train stations but also ways to advertise within the station. Large digital signs promoting brands or products can be impressive and engage more customers to make a purchase and influence their buying decisions.

What this means for HS2

One of the biggest transportation projects in Europe is under development, the HS2. This is a new railway line between London and the West Midlands carrying 400m-long (1,300ft) trains with as many as 1,100 seats per train. The line will carry trains capable of reaching speeds of up to 250mph and will run as often as 14 times per hour in each direction.

With this development in full swing, it is important that they also deliver on the promise of this service providing commuters with minimal delays. Although delays cannot be avoided altogether, digital signage can ensure live updates are being delivered, which is a priority.  It will be interesting to see the evolution of these digital signs in the coming years.

Adrian Thompson is the Global VP of Marketing at SAPPHIRE Technology.