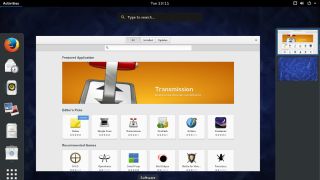 A new level of collaboration just kicked off in the world of Linux, with Ubuntu's 'snaps' now being supported across multiple distros.

A snap allows for the delivery of an app to a Linux machine, with the software sitting separately alongside the base OS and not interfering with it, therefore dodging the risk of a system-wrecking calamity from the app's installation.

And now the likes of Arch, Debian and Fedora support snaps natively, with more distros in the pipeline (such as Gentoo, Mint and OpenSUSE).

The system is smart because it's easy to create a snap, and with snap packages becoming universal, pushing apps out to Linux systems will be a great deal easier, regardless of the distro in question – plus there are added security benefits.

Snaps are isolated from each other and the operating system, and are designed with security in mind, only receiving the permissions they need to work. Updating is simple too, with updates to snaps delivered automatically (equally, it's also easy to roll them back to a previous version). Everything is commendably seamless, in other words.

Those security and management benefits will make this innovation of particular interest to developers in the Internet of Things sphere.

Snaps also make it possible to maintain a stable release and beta versions, the latter of which can be easily previewed by curious users. There's a great deal of flexibility on offer here.

Mark Shuttleworth, founder of Canonical, commented: "Most vendors target Ubuntu because of its popularity. Snaps bring those apps to every Linux desktop, server, device or cloud machine, giving users freedom to choose any Linux distribution while retaining access to the best apps."