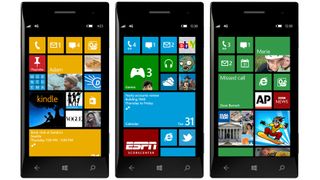 The internet got some official looking confirmation for the new features supposedly coming to Windows Phone 7.8 Friday.

The source of the info is reportedly a slide from Nokia training material. And, even though it's in Chinese, a translation outlines the features that should come with the update.

There have been all sorts of rumors surrounding what Windows Phone 7.8 owners will see once their phones upgrade, but this is the first sighting of anything official with talk of the new features.

Microsoft, by the way, has promised those with older Windows OSes (and not the most recent Windows Phone 8 OS) to keep their phones current with updates, so this could be a sign the Softies weren't just blowing hot air.

You can teach an old phone new tricks

The slide lays out a new start screen for Windows Phone 7.8, while three live tiles sizes are available to let owners give their phones a unique, personalized feel.

The update brings 20 more themes to match what's available in WP8. Users can also plaster their lock screens with Bing wallpapers instead of single photos.

The new WP7 should also let users edit MP3 files to make ringtones, which is a pretty nifty feature. It will include a new patch and security upgrade for Internet Explorer, as well.

We knew most of these additions would likely appear in the update, but now this slide seems to back up those earlier assertions.

Those are all the goodies we could glean from the slide, but much more are rumored to be in the works.

Other features are said to include Wi-Fi tethering to legacy smartphones, camera software updates and support for Xbox Music and SmartGlass.

WP7 and it's new little brother

Though WP7 appears to be getting a new bag of tricks, it's still missing out on a lot of features coming to WP8. Those include true multi-tasking, NFC support, over-the-air updates, multi-core processor support and IE 10.

But Microsoft has to save some stuff for its new OS.

Though the leak gave us confirmation of the features coming down the pipes, there was no mention of a release date, though we've heard plenty of rumors about that as well.

A Chinese tech blog clocked the 7.8 update to arrive four to six weeks after WP8 launches. Since the HTC 8X was the first WP8 released on Nov. 2, the update could roll out at the end of November or middle of December.