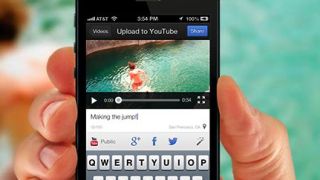 Put a caption on it

YouTube released a new app for iOS devices Monday that allows users to take and upload videos with their iPhones and iPod touches with more ease.

There are also editing tools included, such as the ability to add a soundtrack, do color corrections or stabilize the video all from within the app.

Most of all, YouTube Capture is built around ease of use, allowing anyone making a video the ability to shoot and upload all within just a few screen taps.

File management is made easy with YouTube Capture, as everything you shoot is uploaded automatically to YouTube.

From there, you can decide whether to share the video on social networks, or just show it off to those closest to you.

With the enhancement tools available in the app itself, having a steady hand or knowledge of lighting isn't necessary, as those issues can be addressed when the shooting is completed.

Even when the video is finished, any additional corrections made can be undone, and you can also add these adjustments to the videos already in your Camera Roll.

YouTube Capture is currently only available on iTunes, but an Android version is also in the works.

Check out this video laying Capture out below: