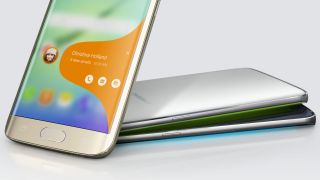 Now that spring has finally sprung, we've seen the release of the latest crop of attention-grabbing Android handsets. While your team may believe "Replacing old smartphones for new ones" belongs on the list of chores in this year's spring cleaning, there is little guiding consensus about this season's models.

While the LG G Flex 2 and the HTC One M9 are iterative responses to previous models, the Samsung Galaxy S6 Edge is an entirely new form factor, and has been catching eyes and raising questions. Even if your team is more experienced with one of these company's devices, these offerings have all yielded unique enough results in our reviews to warrant further comparison.

It's time to forget how each of these companies has touted their latest handset as the next best thing, and ask the most important question: which one is truly best-for-business?

The LG G Flex 2, which runs on a very new Snapdragon 810 processor, achieved notably high Geekbench 3 scores in the range of 3,427–3,506. Disappointingly, those numbers come with a giant asterisk, that they were earned in tests when the G Flex 2 was cool, calm, and collected. Running our benchmarking tests multiple times in a row led to dips in performance, where the score dipped as low as 2,191, thanks to what we at TechRadar are considering may be an overheating issue.

Manufacturer LG has told us that "upcoming software releases" will "provide further improvements in this area," but these overheating issues clearly signify that the phone may have been rushed to market.

HTC's One M9 tested very well under the Geekbench 3 test, scoring a 1059 in the single-core performance and a 3803 in multi-core measurements. That G Flex 2 topping number is all the more impressive when you consider that HTC has throttled the speeds of the hardware (if only slightly) so it doesn't go burning hot.

As strong as the as the M9 and the G Flex 2 performed, they're an afterthought in this category thanks to the Samsung Galaxy S6 Edge outright dominating in test results. The S6 Edge, on an average of multiple Geekbench 3 tests done to make sure this wasn't a fluke, scored an average of 4774 on the multi-core benchmark.

Some may look at this range of scores and wonder why one would need stellar CPU performance out of a smartphone. Isn't it just a communications and internet device? All asking those questions can stick with the G Flex 2, but if your team routinely runs software that tests the limits of hardware, then the other models may be more your speed.

Once you've bought the phones for your team, you can only hope that it'll be a long time before you have to replace any of those units. So let's try to purchase once and never need to replace for damages. Your CFO will breathe easier every time a dropped phone doesn't result in a busted unit.

Not only is the G Flex 2 marketed on it's durability, it held up under all the pressure that we at TechRadar threw at it. Our reviewer put it right where you'd never want your phone to go: under your foot. When the G Flex 2 landed there, several dozen times, they applied all the pressure we could to straighten out the frame. Fortunately for LG's industrial design and marketing divisions, the phone always flexed back into its original arch shape. LG claims the G Flex 2 is even stronger than the original, which was able to withstand 1,000 pounds of pressure. Our tests didn't go that far, but until we see otherwise, it's worth believing. LG's claims of an "advanced self-healing back," did not live up to the hype. While smaller, tiny scratches disappeared, medium scratches (those, say, from a toothy key) stuck around.

The S6 Edge and the One M9 aren't marketed or sold on their durability, but while using demo units of the devices, I felt a distinct difference between their build. The heavy-metal look and feel of the M9 (and fact that it's almost identical to the M8) gives me confidence that the device will hold up to the tests of time. The design of the S6 Edge on the other hand, gives me no such assurances. Unless you buy (and enforce the usage of) cases for any S6 Edges in your team, it's durability will be hindered by the worst of both Apple's iPhone 4 and 6 designs.

Sure, headlines have already been made that the Edge may bend (like Apple's iPhone 6 Plus), but that's not what I'm talking about. Due to it's unique design, the left and right sides of the S6 Edge are the thinnest sides I've ever seen on a phone, making it near impossible for me to grip it comfortably. While the demo unit didn't feel like it would bend, I was in an almost constant fear of dropping the Edge

Of course, this could be remedied with a case. While I didn't see any S6 Edge cases in retail stores, Samsung makes two different cases for this model, which they sell online. As well they should, since I don't see case manufacturers rushing to make cases for this phone any time soon. A case that doesn't obscure the important left and right edges of the S6 Edge would be hard to make without considerable compromises.

The problem that the S6 Edge borrows from the iPhones 4 and 4S is the frivolous use of glass on both sides. The glass back panel is not a feature, but a design choice that looks like a panel just waiting to be broken. Sure, the material feels nice against your hand, but that's not worth an inevitable broken pane.

Sending your people out into the world, you're going to want them to be reachable, especially if a problem pops up that would keep them away from a wall outlet. Investing in a larger battery is akin to whittling down the amount of excuses your team has to throw back at you. Making matters worse, this generation of Android devices has lost a long-beloved feature: a replaceable battery. This ripple in the market makes the internal battery all the more important.

Of the three devices, we only experienced a solid day-plus of battery life with the G Flex 2, which has 3,000mAh battery. Both the M9 (with 2840 mAh) and the S6 Edge (2600mAh) were solid disappointments to TechRadar in terms of their battery life.

Running a looped HD video for 90 minutes, one of our standard battery life tests, the G Flex 2's battery drained by 13%, the S6 Edge's lost 15% and the M9's lost a whopping 31%. We have some reason to believe that the M9's battery may improve following an upcoming update, but for now, that's an unfortunately large chunk of battery life to be lost like that.

Both the LG G Flex 2 and the Samsung Galaxy S6 Edge come with power adapters that allow for advanced charging speeds. The Flex 2's packed-in travel charger gets you to 50% in 40 minutes, and to a full charge in 1 hour and 38 minutes from a completely drained battery. While the S6 Edge featured the smallest battery of the bunch, its fast charging technology is impressive. While it charges 1.5 times faster than previous Galaxy S models, the major statistic of note is that it can regain four hours of usage from just 10 minutes of charging with the charger that it came boxed with (and no other chargers, thanks proprietary technology!).

While the M9 has a middling battery for this group of phones, and its fast charging technology offers a pretty amazing 60% charge in just 30 minutes, that's a feature you will need to pay more for. The charger the M9 comes with doesn't support the QuickCharge capabilities that you need to get that quick 60% charge! How can HTC be cutting corners to reduce their bottom line here? Buying this already expensive device shouldn't lead to you buying another charger from HTC to enable all the features.