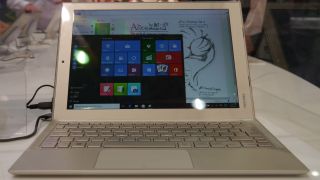 Toshiba did something it rarely does; put a closely-guarded tablet prototype on display in a very public venue, perhaps as a way to pre-empt the expected launch of the iPad Pro next week.

While its latest, superthin Dynabook tablet is still work-in-progress, the final model could not only boost Toshiba's unimpressive track record in the tablet market but also provide with a benchmark for others to follow.

The Japanese company only uses the Dynabook brand in its own country and it is likely that the final version of the prototype we saw will end up under the Satellite Click brand outside Japan.

Just like its smaller siblings, the Dynabook prototype has a 1920 x 1200 pixel resolution (spread over a 12-inch display) and is powered by an Intel Atom processor, almost certainly the x5-Z8500 or the 8700, which both support up to 8GB of dual-channel memory.

As with other Click convertible devices, it comes with TruCapture and TruRecorder. However, it comes with a digitizing stylus (almost certainly from long-time partner Wacom) that attaches to one side of the tablet as the former is too thick to even consider having a slot for it.

And as expected, Toshiba also bundled an app for it, TruNote, which reveals the real ambition of Toshiba for this device; a smarter tablet alternative for the content creation audience.

The positioning of the Toshiba logo and the camera indicate that the tablet was designed to be used in a portrait mode rather than in landscape which is the default mode for Windows 10, the OS that runs the device.

Other than the size and the presence of a stylus, the other notable difference is the keyboard with Toshiba apparently eschewing a feature-ladden dockable keyboard (with extra ports and additional battery capacity) for a simpler one that is not only thinner but also lighter.

As the tablet is connected magnetically to the keyboard (with data transmission probably done by Bluetooth) rather than via a sturdier latch, you won't be able to alter the vertical viewing angle. The other potential issue is that the keyboard keys are likely to have a shallow travel making long typing sessions less enjoyable.

Overall, the design is quite similar to the 2012 Archos 101 XS except that Toshiba added a touchpad.

Other than the front and rear cameras, features that we've managed to identify include a microSD card slot, a mini-HDMI one, an audio connector and two other ones, possibly USB Type-C or microUSB ones.

In a statement, Toshiba said that the prototype is designed to assist everyone in "quickly and effectively capturing information, organizing ideas and better expressing their thoughts".

The prototype was for showcase only but if as expected, it gets launched later this year to compete with Apple's iPad Pro, it will have a fighting chance to establish itself as one of the best Windows 10 tablets on the market.