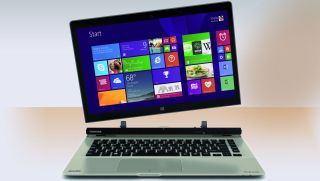 Toshiba unveiled a few laptops ahead of the back-to-school period and at least two of them remind us of Lenovo models we've seen in a recent past.

The Satellite Click 2 for example, resembles the Ideatab Lynx or the ThinkPad Helix while the Satellite Radius looks a lot like the IdeaPad Yoga.

The Click is essentially a laptop with a detachable full size keyboard; the 13.3-inch touchscreen display contains all the main components including the battery.

Two versions of the Click will be available. The cheaper version runs on a 4th generation Core i3 processor from Intel with 4GB of RAM and a 500GB HDD.

The more expensive version, called the Click Pro 2, has a full HD resolution (compared to a 1,366 x 768 resolution for its little brother), a Core i5 processor, 8GB of RAM and an SSD.

It is also thinner and lighter than the Click, which is probably down to a smaller battery (8 hours battery life compared to 6 hours).

As for the Satellite Radius, it has a screen that can rotate 360 degrees, with an aluminium enclosure, a 15.6-inch full HD display (bigger than the Lenovo Yoga) and a Core i7 processor with up to 1TB storage.

All three laptops will go be available in the third quarter of the year. Pricing hasn't been confirmed yet. Toshiba also announced two new Encore 2 tablets based on an Intel processor and Windows 8.1 with Bing.