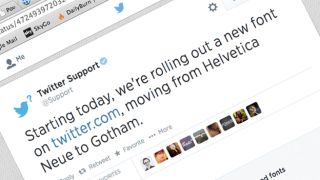 Just weeks after rolling out its spiffy new profile pages, Twitter has continued its spree of visual renovations with a brand new typeface.

Late on Friday, the social network announced it had ditched the trusty and time-tested Helvetic Neue font in favour of Gotham.

The change is now in effect on the browser-based Twitter.com site, but hasn't yet gravitated to the firm's suite of mobile apps.

While some design and typeface experts have decried the move, Twitter explained that the font was chosen because it was stylish, but not exclusive.

On its brand assets page, the firm wrote: "Words don't just hold meaning; they communicate by their very form. We primarily use the Gotham font family: elegant and direct, stylish but not exclusive. Putting well-designed words in our product enhances the user experience."

How do you like Twitter's foray into Gotham? Let us know your thoughts below.