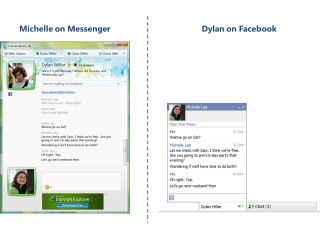 Microsoft has announced an update for its Windows Live Essentials 2011 Beta, bringing updates like Facebook chat to messenger, video chat, facial recognition and integration with Office.

Microsoft states that it has had 3 million unique users for the beta version of Messenger alone, and the feedback has helped shape the changes to the software - aka Wave 4 beta.

"First, we want to say thank you for your help, blogged Microsoft's Chris Jones.

"Your beta feedback and usage has helped shape the many improvements we've made and continue to make across Messenger, Photo Gallery, Movie Maker, Writer, Mail, and Family Safety."

One of the key additions is integration of Facebook chat into messenger - with a huge overlap between users of the social network and Microsoft's online applications.

"Many of you have been asking for Facebook chat, and it's finally here," adds Jones.

" More than half of all Messenger customers also use Facebook. With the new Facebook chat integration, you now...have one place to chat with all your friends.

"And if you use Facebook but don't use Messenger today, you now have an always-on "people app" on your PC that gives you instant access and notifications as people come online in Facebook or Messenger."

Other improvements listed by Microsoft are:

A quicker Messenger – The time it takes to sign in, and to refresh contacts and social feeds, as well as animation speed, are all faster than in previous versions of Messenger.

Better integration with Office - Writer is much better at retaining all formatting when you copy and paste from Word and other Microsoft Office programs.