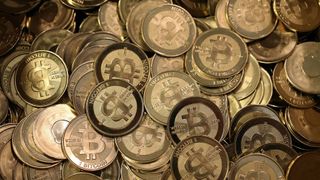 Has the Bitcoin bubble burst? That’s the question a lot of people have been asking recently, and with renewed vigor today, given that the virtual currency has taken a massive tumble – indeed, it has just dipped below the $10,000 (£7,250) mark, almost half of the peak it reached last month.

So given that it increased almost fivefold in terms of value in around two and a half months through to mid-December, it’s hardly surprising that we’re seeing some major volatility on the down-slope.

As for reasons behind the big drop, investors in the virtual currency have been spooked by stories emanating from Asia, including rumors that South Korea might ban the trading of cryptocurrency – although this won’t happen, the country has since clarified, at least not in the near future – and that China could also look towards a ban.

And of course the fall in value itself has provoked sell-offs as folks get more nervous watching the Bitcoin diminish.

Bitcoin isn’t the only cryptocurrency to be getting hammered – this is happening across the board, or at least with most of the popular virtual currencies. For example, Ethereum has also dropped to around the $900 (£650) mark, when at the weekend it stood at well over $1,400 (£1,000).