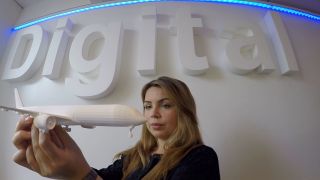 British Airways (BA) says it’s exploring the possibility of bringing in 3D printers to make aircraft parts, while outlining the many benefits that such a move could have – including minimizing any delays passengers might experience with their flights.

Specifically, at least to begin with, British Airways is talking about printing non-essential cabin parts, which would mean things like bits of tray tables, parts for toilets or inflight entertainment systems.

As BA observes: “While these components do not impact the safe operation of the flight, they can reduce the number of seats or toilets available for customers and cause delays as engineers wait for the parts to be flown to wherever the aircraft is.”

So in this way flight delays could potentially be reduced by 3D printing, because if replacements such as these are needed, they can be created there and then with 3D printers located at the actual airport.

This is also part of BA’s initiative to reach net zero carbon emissions by 2050, because it will mean not just a reduction in delays, but that less transportation of plane parts will be needed.

And moreover, 3D printing can produce aircraft parts which are just as robust as those produced in traditional manufacturing, but can weigh up to 55% less – and a lighter aircraft obviously means less fuel used and cuts down on emissions.

BA also produced a list of its top 10 predictions of how 3D printing might be used in aircraft in the future, which runs as follows:

So as you can see, it’s very much the basic stuff BA is thinking about to begin with, such as cutlery and passenger wash-kits, but eventually we could be looking at entire seats, windows, circuit boards and flight deck switches – and indeed 3D-printed aircraft hulls.

BA also made a few further predictions concerning how taking flights in the future will be very different, including implementing biological scanners which determine the physiological and nutritional needs of passengers, suggesting appropriate food and drink to meet their requirements – food which could be printed on-board the aircraft.

Because yes, there are great strides being made when it comes to printing foodstuffs. In fact, as you may have seen recently, 3D-printed beef steaks and chicken could be on the menu in European restaurants in 2020.