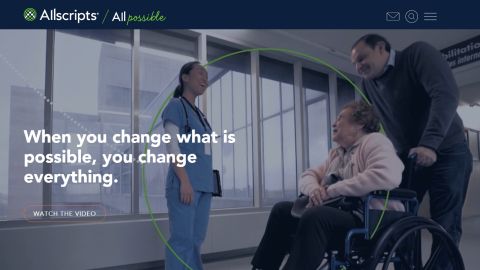 With a gaggle of offerings, and built on an open platform, Allscripts offers a variety of EHR’s to suit a wide variety of users.

Unlike some electronic health records (EHR) that cover the entire spectrum, Allscripts focuses on small to medium sized physician practices. This American company with its headquarters in Chicago employs over 7,000 folks, has 30+ years of experience as it started in 1981, and is publicly traded.

The Allscripts software gets used at over 2,200 hospitals, 14,000+ physician practices, and connects over 18 million consumers presently.

Rather than simply offering a single EHR to cover a variety of needs, Allscripts offers an entire family of products, that cover the full range of needs. The choices include:

The list of pluses to Allscripts runs long, of course depending on which of the packages from above gets chosen. These include inputting features for handwriting recognition, and voice recognition to support charting. With Allscript’s emphasis on serving the physician practice market, it follows that it has support for appointment scheduling, and a self service portal for patients. To keep it affordable, it is also meaningful use certified, so practices will be eligible for the financial incentives of an EHR.

As Allscripts started as an electronic prescribing company, another forte it has is ePrescribing. Their well designed interface makes it simple for clinicians to transmit their prescriptions securely to the patient’s pharmacy of choice. This method of prescribing is increasingly popular with clinicians, pharmacies and patients alike as it enhances patient safety, minimizes lengthy interactions between pharmacists and prescribers, saves money by providing formulary status of the medication to the prescriber, and is simply more efficient. After all, patients love leaving the doctors office, and going directly to their local pharmacy with the prescription waiting for them for pickup, rather than the wait required after handing in a paper prescription at the pharmacy.

A final strength of Allscripts is that it is based on an open platform.

The Allscripts interface is a weakness. It garners complaints that it is clunky, with information not as clearly displayed as some competitors. Furthermore, navigation of the interface usually requires several mouse clicks to get to the needed information, with less intuitive navigation, requiring clinicians to take extra time to navigate through the interface, which leaves less time for patient care. For example, the charting tool has patient information in tabs, such as labs, immunizations and vitals, which then forces the clinician to have to click often between these multiple tabs- which exceed a full dozen- just to get through a single patient encounter.

Unlike some competing platforms that are sleek and slick in the interface department, Allscripts shows its age, with a poorly organized, and outdated appearing interface. This also contributes to a steeper learning curve for new users of this EHR.

Similar to other EHR’s, Allscripts is quite opaque in their pricing structure, requiring contact with the company to get an idea of the costs involved. With every practice and hospital organization truly unique, at least on a certain level, a custom quote does make sense.

However, there are some concerning reports regarding the pricing structure of this EHR. These include that the upgrades to the platform, and also the ongoing service is on the higher side of pricing. Further concerning is that Allscripts has a reputation for longer contractual obligations to lock users in for longer periods than they might initially be comfortable with. These prolonged contracts can also make it difficult for organizations to change their EHR’s once they commit to Allscripts if their needs change, or are not satisfied.

Compounding the issue of the long contract lock in is the lack of an available free trial prior to committing.

Allscripts, compared to its brethren in the segment, has less support for platforms, as while it does support Windows, it does not have a version for the Mac as well. On the mobile side, things are not much better, with again support for the single platform of iOS, but lacking for an Android version. Be sure to consider if the supported platforms will work with your installed base of equipment before committing to this platform.

In terms of help, initial training gets provided via a variety of methods, including in person, live online, webinars, and via documentation to get the Allscripts software up and running. Subsequently, support options are not as comprehensive, only offered via phone support, or online, but at least the former is available 24/7.

Allscripts offers a whole spectrum of choices to cover the EHR needs of everything from a hospital system, down to an independent practice.

The advantages include that it is built on an open platform, and its strength in ePrescribing makes it among the easiest to use on this task. Concerns remain with their opaque pricing, their emphasis on longer term contracts, and limited platform support on both the desktop and mobile side.

Balancing that out, Allscripts is the EHR of choice for thousands of hospitals and physician practices alike, and interacted with by millions of consumers for their healthcare needs.