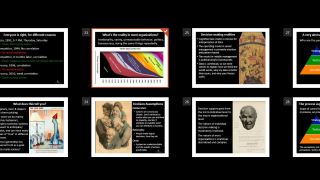 Windows 8 vs Windows 7 vs OS X Lion: which is right for you?

The teasing's over: more than 1 million of you have got your hands on the Consumer Preview that enables you to see exactly what Microsoft's up to with Windows 8.

Will Metro tempt you away from the Mac? Would you be better off sticking with Windows 7? Let's find out.

By the way, we know that Apple has previewed OS X Mountain Lion already, but we haven't got hands on with it ourselves as yet, so that's why we've used Lion for comparison here.

While Windows 8 will be available on ARM-powered devices, the Consumer Preview is for 32-bit and 64-bit Intel and AMD machines only. OS X Lion, of course, is a 64-bit, Intel-only affair. System requirements are fairly undemanding: Lion wants a Core 2 Duo or better with 2GB of RAM, while Windows 7 and 8 both want a 1GHz processor with 1GB of RAM or 2GB for 64-bit.

Lion is only (officially) available for Apple PCs, and it's strictly a desktop/laptop OS. Despite appearing on the odd tablet we'd argue that Windows 7 is really just a desktop/laptop OS too. Windows 8, however, is designed to encompass desktops, laptops, tablets and possibly smartphones too, and should ship on a dizzying range of devices later this year. For more about Windows 8 tablets check out our need to know piece.

Lion's interface is the first step in an ongoing process: Apple wants to deliver a unified experience across its OS X and iOS apps, so while the operating systems remain separate their interfaces are starting to share things.

The jury's out on some of them - Lion's reversed mouse scrolling is designed to match the iPad's way of doing things, but drives some users demented; Calendar's iOS-style makeover has been widely mocked - but despite the iOSification it's still essentially a more refined version of the Snow Leopard UI.

Windows 7, similarly, is a refinement of the traditional Windows interface we've had since Windows 95: it's essentially Vista given a bit of spit and polish. The move to Windows 8 is much more dramatic.

The start button is gone, replaced with "hot corners" that make things happen when you move the mouse to the edges of the screen, and there's a new Metro-style user interface that ties in nicely with Windows Phone and the Xbox 360 Dashboard. A feature Microsoft calls Semantic Zoom enables you to zoom out for a birds-eye view of your programs, and you can easily reorganise the tiles by dragging them around.

The Windows 8 Metro interface is beautiful, but the traditional Windows one is there too for applications such as Windows Explorer, Office and legacy apps (on ARM devices it'll be there for Explorer and Office, but legacy software won't run). The jump from Metro to old-Windows is rather jarring, but the alternative would be for Microsoft to say "no, you can't use your old apps" to every Windows user. That would be commercial suicide.

Windows 8, like Lion, is all about the fingers. Forget Windows 7's faintly horrible touch features: Windows 8 is firmly finger-friendly, with a nice on-screen keyboard, gesture recognition, palm rejection - so you don't accidentally hit something if your palm touches the screen - and "fuzzy hit targeting" to work out what bit of the screen you intended to poke.

We think Windows 8 has a bit of a split personality: its Metro interface was clearly designed for touch, while of course the Windows Desktop was designed for keyboard and mouse.

Microsoft has put a lot of effort into making the traditional Windows UI more touch-friendly - while the on-screen UI elements appear too small for touch (just like they do on Windows 7), the fuzzy targeting does a sterling job on the standard Windows controls - but using one interface with the other's input device (Metro with a mouse, desktop mode with a finger) is distinctly odd and will take a bit of getting used to.

Apple doesn't currently make touch-screen PCs, but Lion works best with a trackpad such as the ones built into MacBooks or Apple's optional Magic TrackPad, enabling you to swipe between full-screen apps, call up Mission Control to see your Spaces windows and open apps, zoom, rotate and generally fiddle around with on-screen items.

Windows 8 vs Windows 7 vs OS X Lion: handwriting and keyboards

Windows 7 and 8 both support handwriting recognition, and in Windows 8 the writing area has been expanded to make it a bit less fiddly.

Recognition is generally fine provided you keep your scribbling reasonably neat. The on-screen keyboard (on tablets) has been improved for Windows 8 too, with fuzzy hit targeting improving accuracy and a nifty thumb-based mode for fast typing when you're holding a tablet in both hands.

OS X has had an App Store since Snow Leopard, and it's becoming an increasingly important way to get software - in the forthcoming Mountain Lion release, you'll be able to block non-App Store apps completely if you wish.

Windows 8 gets an app store too, although Microsoft calls its one the Windows Store. That's where you'll get your Metro apps, which take advantage of the new interface and which are sandboxed for security. Windows 8 will also run traditional Windows apps unless your hardware is ARM-powered, although there will be an ARM-specific version of Microsoft Office.

Metro apps are lovely things, resembling big versions of Windows Phone apps - which, after all, is essentially what they are. We like what we've seen so far but it'll be a while before it's clear what Microsoft's developer army comes up with. For the duration of the Consumer Preview all apps will be free to download, although Microsoft stresses that the apps are "app previews" rather than the final versions you'll get when Windows 8 ships.

Metro apps aren't necessarily the same as their desktop equivalents: for example you get two versions of Internet Explorer 10, one for Metro and one for desktop mode. The latter supports plugins, toolbars and Flash but the Metro version doesn't.

Windows 8 is the cloudiest version of Windows yet, and we mean that in a nice way: where its predecessor is a one-PC operating system, Windows 8 is more of a window onto your cloud-based content. When you run it for the first time you'll be asked for your Microsoft Account (formerly Windows Live) or to create one, and this account will enable you to access your settings, bookmarks and passwords from whichever Windows 8 device you happen to be using.

It's clever, too: if you link other accounts such as Twitter, Flickr or Facebook Windows 8 will automatically populate your photos app, the People app and your messaging contacts list. You also get SkyDrive, Microsoft's cloud-based storage system, which is currently in Metro form (the desktop version is coming soon, Microsoft says) and will enable apps to synchronise data across multiple devices.

Apple's cloud integration in Lion is a bit half-hearted: while it does have iCloud for your calendar, contacts, bookmarks and photos, key apps such as Pages and Numbers don't use it yet. That'll change in Mountain Lion, which is much more cloud-oriented, but for now many Mac users find themselves using services such as DropBox or SugarSync for file syncing.

Windows 7 is the most secure Windows yet, but Microsoft isn't resting on its laurels: the Metro version of IE10 is designed to be plugin-free for security reasons as well as simplicity ones, and the new Secure Boot should prevent rootkits from doing their thing.

Metro apps are sandboxed too, so infecting a Windows 8 PC should be comparatively difficult. Windows Defender has been beefed up too, and it's essentially Microsoft Security Essentials with a new name - so it protects against malware as well as viruses.

OS X reckons that user error is more of a concern than malware, and on Macs that's probably true. Despite years of dire warnings and proof of concept malware, OS X remains a virus-free environment. Lion's automatic saving and file versioning, as well as its superb Time Machine backup, can help avert disaster if you forget to save something, suffer a crash or accidentally damage your data. Windows 8's File History Backup provides similar peace of mind.

Windows 8 vs Windows 7 vs OS X Lion: performance and stability

Microsoft has clearly been tinkering under Windows 8's hood because, while the Consumer Preview isn't finished code, it's much more solid than the Developer Preview. Windows 8 feels snappy, boots more quickly and promises to use memory more efficiently than Windows 7 on the same hardware, but it's too early to compare battery life as the system hasn't been optimised yet. As the Consumer Preview is Intel-only, we can't compare its performance on tablets with rival devices.

The need for Windows to support millions of possible hardware and software combinations means it'll inevitably crash from time to time, but from what we've seen so far Windows 8 should be as reliable as Windows 7 - which, in our experience, means it'll be very solid.

Apple's tight integration of hardware and software means Lion should be more stable than Windows, but that isn't always the case: Lion shipped with some show-stopping bugs including a video nasty that locked up entire systems at the first sniff of a video clip. Such bugs have now been squashed, however, and for us Lion has been rock solid since its first update.

Windows 7 was really Windows Vista done properly, but the move to Windows 8 is something else entirely: it's the biggest change in Windows since we went from Windows 3.x to Windows 95. If you currently own and like Windows 7, we think you'll want to upgrade - even if you hate Metro, as you can spend all day in the desktop mode if you prefer. Some people, we suspect, will do just that: not everybody thinks Metro works well with a mouse, and we're still arguing over it in the office.

Is Windows 8 better than Lion? You might as well ask whether Belgium is better than cheese: while they're both operating systems, they're coming from completely different perspectives.

While Lion takes some ideas from iOS and Mountain Lion takes even more, OS X is still a desktop OS: there are no styluses in Apple-land, and for now at least OS X and iOS are two separate operating systems for two kinds of devices. Windows 8, on the other hand, is designed to span everything, providing a consistent experience across tablets, PCs and ultimately phones, and tying in closely with other products such as Kinect.

What we think Windows 8 has that Windows 7 perhaps didn't is the wow factor, the iPad-y desirability that Apple fans know so well.

While the Consumer Preview looks and feels largely finished there's still plenty of work for Microsoft to do, but from what we've used so far we're very excited. Unless Microsoft does something spectacularly silly at the very last moment, Windows 8 is going to be something special.