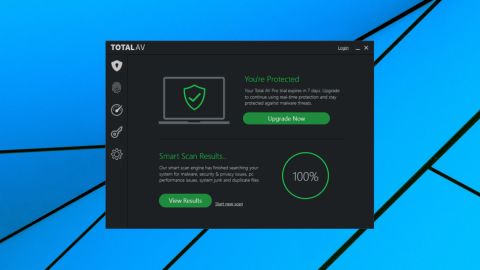 Total AV has taken a quality Avira engine, made it worse, and thrown in a few pointless extras in the hope you won't notice. You like Avira? Choose an Avira product instead.

Total AV is a small security vendor with a wide range of antivirus and other products. The firm has a simple free antivirus which runs on-demand scans to detect and remove threats, but doesn't offer real-time protection.

Protection is available for Windows, Mac, iOS and Android. We've just described the main Windows features, but other platforms have additional touches of their own. For example, Android users get the ability to password-protect apps, preventing others from accessing their most confidential data.

Total AV Antivirus Pro looks cheap at $19 for a one-year, three-computer license, but after that renews at an expensive-looking $99.

Total AV Internet Security adds a VPN and supports up to five devices, and lifts the price to $39 in year one, $119 on renewal.

Total AV Total Security extends the suite further with ad blocking and a password manager, and is priced at $59 in year one, $149.99 afterwards.

This doesn't look like great value, at least after the first year discount. Total AV has the Avira engine underneath, and you can get that in a basic Windows form for free. Alternatively, Avira Prime gives you protection for five devices, an unlimited VPN, a hugely powerful Windows optimizer and many more features, all for $99 a year.

If you're just looking for a Windows antivirus, the excellent Bitdefender Antivirus Plus 2020 covers up to three PCs for $60 a year.

Total AV Antivirus Pro is at least easy to try, with a free 7-day trial available, no payment details or even email address required, and there's a 30-day money-back guarantee available if you need it.

The Total AV website does its best to persuade new users to buy the product immediately, but head off to the Applications page and you'll find a Download Free Trial link.

After an installation process barely lasting a minute, Total AV Antivirus Pro launched into an initial scan, checking our system for infections. That's a reasonable idea, but we noticed that Total AV doesn't immediately disable Windows Defender, and we found Defender was using a lot of CPU time during Total AV's scan. We don't know why – it could be that Defender was monitoring Total AV's actions – but whatever the reason, having both engines running at the same time could lead to conflicts.

Still, after around 15 minutes the scan was finished, giving us a clean bill of health, and with no false positives. After rebooting, we found Defender turned off and Total AV set as our system antivirus.

Checking Total AV's installed files, we found the majority of the installed executables were part of Avira's engine, along with a number of OpenVPN components, and Total AV's own interface and database management files.

Antivirus products which use engines from other providers can be more vulnerable to malware attack, and Total AV was no exception. We were able to stop its service without difficulty, quickly removing most of its defenses, and malware could effectively disable the product with two or three simple commands.

Whether any malware would make the effort to do this is open to question, but just being vulnerable to such a simple attack is an issue, and leaves us wondering what other security holes Total AV might have.

The Total AV console looks good, with your protection status instantly visible on its opening screen, and many other functions accessible from its sidebar and menus: scanning, quarantine, disk cleanup, startup manager, settings and more.

You're able to launch a 'Smart Scan' with one click, and this checks your system for malware, junk files and a handful of other performance issues.

If you're only interested in malware, you can alternatively run Quick or Full System scans, or use a custom scan to check the files and folders you need.

What you don't get is any form of Explorer integration, unfortunately. You can't right-click Downloads\Risky.zip in Explorer and choose 'Scan with Total AV' – instead, you must open the Total AV dashboard, hover your mouse cursor over the first icon on the sidebar, click Malware Scan, click Custom Scan, click Add Files, navigate to your file, click Open, and finally click Start Custom Scan.

This isn't just about convenience. Total AV's lack of simultaneous scanning support means that if the app is running a full system scan, you're not able to run on-demand checks, for example scanning a USB key you've just plugged into your system.

This doesn't significantly compromise your safety – Total AV will still check a file when you run or open it – but a well-designed antivirus should do better. Kaspersky products, for example, will happily run multiple scans at the same time, each in separate windows with their own reports.

Once you've started a scan, times are a little longer than usual, though still acceptable. We didn't spend long digging into the reasons why, but at first glance it seems that even the Quick Scan checks every file in its target folders, even those which aren't likely to contain a malicious payload (images, say).

You can at least tweak this in Total AV's extensive Settings dialog, which is far more configurable than we expected. You'll have to figure this out for yourself, though, as there's no help within the program, and the support pages on the website are poorly organized, not fully searchable, and referred to some earlier version of the program with a different interface.

We left Total AV Antivirus Pro at its default settings, and found no issues with its file detection. Sample malware on our system was picked up without difficulty, downloads were detected, and infected payloads were spotted as they were unpacked from encrypted archives.

Web filtering via the core engine didn't appear to be as reliable. The package claims to 'block crypto mining URLs', for instance, but this didn't work with the samples we tried, maybe because it's based on a blacklist, rather than any form of real-time detection.

Total AV also has a Safe Site browser extension which aims to block access to malicious websites. We didn't look at this in depth, but it looks like it's using safe browsing data from Google, and may not give you any more protection than you'll get from Google's Chrome browser alone.

Our small-scale tests give an idea of an antivirus engine's abilities, but to get the big picture, we also check the results from the major independent testing labs.

That's not easy with many smaller antivirus companies, as they're rarely included in the major tests. But, to its credit, Total AV has recently been submitting itself to close examination by AV-Test.

The July/August results were a little disappointing. Total AV managed 99.9% and 99.7% detection of well-known threats, for instance – most competitors (including Avira, with the same engine) achieve 100%. Worse still, it picked up only 94.1% and 96.7% of zero-day threats, compared to an industry average of 98.9%.

Zero-day protection in the following September/October report was so spectacularly bad, we initially wondered if it was a misprint: Total AV stopped only 78.6% of threats in one test, a disastrous 57.4% in the other.

Whatever the issue, this wasn't something to do with the Avira engine, as Avira's own scores were 99.3% and 100%. Even Windows Defender was way ahead, with detection rates of 97.9% and 100%. In other words, Total AV users would have been significantly safer if they'd not worried about antivirus, and left Windows at its default settings.

Total AV Antivirus Pro goes beyond the usual malware hunting basics with a host of PC management extras. Sounds great, at least initially, but take a closer look and you will be disappointed.

The Junk File Finder checks only four areas of your system, for instance (the Recycle Bin, cached Windows updates, temporary files and Windows Error Reporting Files). It can't begin to compete with CCleaner, and even Windows' own Disk Cleanup tool does more.

Somehow, though, Total AV claimed it could recover 31GB of data, while CCleaner reported barely 10GB across many more categories. Was Total AV smarter than we thought? No, it was just buggy: after we clicked the 'yes, okay, save us 31GB' button, the program proudly told us it had actually recovered only 7.43GB.

A Duplicate File Finder is very, very basic. It only searches in your user folders, for instance (Documents, Music, Videos, Pictures), and although it correctly finds and displays any duplicates, it doesn't give you much information to help you decide what to keep. You can't even see the last modified date of any documents, for instance – you have to figure out what you need from the file name, path and size alone.

A largely pointless Application Uninstaller displays your uninstalled apps and enables uninstalling any you don't need. There's no major extra functionality, no recommendations about what's safe to remove, no 'force uninstall' to fully remove your target apps. The only benefit is you can mark several apps for removal, click 'Uninstall' just once, and then wait as Total AV runs the regular uninstallers for each, one after the other. Best of breed freeware like Bulk Crap Uninstaller will do that, and much, much more.

A Startup Manager enables viewing and optionally disabling any apps set up to launch when Windows starts. It didn't work properly for us, listing many apps as having an 'unidentified publisher', and has less functionality than Windows 10 users will find in their Task Manager Startup tab.

The Browser Cleanup tool is as basic as the rest of the collection. It only supports Chrome, Firefox, IE and Opera (no Edge); it only looks at history and cookies; it can't even read all of these (it wasn't able to read IE's cookies, although CCleaner could); and the figures it quotes don't always match with what we saw in our browser profiles, or CCleaner or similar apps.

There is what looks like an interesting privacy bonus in a Data Breach Check. Enter your email address, Total AV suggests, and it'll tell you whether it's been compromised in a data breach.

Read the small print below the 'Check Now' button, though, and you'll see that by checking your email, you're also agreeing to Total AV's EULA and privacy policy, and to allow the company to set up a free account for you.

As Total AV is only using data from 'have i been pwned?', you'll be better off entering your addresses there, where you won't be signed up for anything at all.

Total AV Antivirus Pro is the Avira engine, but not as effective, more open to attack from malware, with some feeble PC maintenance extras that you almost certainly don't need. If you like Avira, you'll be better off going direct: Avira Free is a great free product, and although it doesn't have the introductory discount, Avira Prime gives you more features for the same $99 a year.