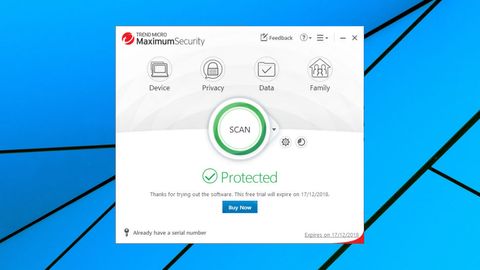 There's quality protection here, but experienced users might wish for more ways to fine-tune their security (and we'd like to be able to cover several systems on one license, too).

It may not make as many headlines as some rivals, but Trend Micro is a security giant, with a wide range of enterprise, virtual, business and consumer antivirus products bringing in an annual revenue of more than a billion dollars.

The Trend Micro home product range starts with Trend Micro Antivirus+ Security, a simple package which focuses on the fundamentals, yet still manages to deliver more than you might expect.

Trend Micro Pay Guard launches a secure version of your default browser (as long as it's Chrome, Firefox or IE) to protect online banking and other sensitive transactions. There's even a spam filter for Outlook, something that just about every other security vendor reserves for its security suite.

The license can only cover a single PC, though (there's no option to add more), which makes it expensive if you've got several. Bitdefender Antivirus Plus 2020 currently costs $25 for year one, $60 on renewal, but you can install it on up to three PCs.

At the top of the range, Trend Micro Maximum Security is a full-strength security suite which adds features like a password manager, parental controls and social media protection. It supports multiple devices and platforms, with apps for PCs, Macs, Android and iOS devices, and this can make it seem better value. For example, covering any mix of five devices for one year costs $40 in year one, $90 on renewal, less than half the price of Trend Micro Antivirus+ Security for many more features.

The Trend Micro Antivirus+ Security web page doesn't highlight any trial build, and even when we found the trial link, the company seemed a little reluctant. 'Why try when you can buy?', begged the website? Uh, because we think 'try before you buy' is a good thing, thanks all the same.

Fortunately, there's also a 'Continue to free trial' link. We clicked it, and were directed to a support page with instructions on downloading and installing trial builds.

Trend Micro used to be a little half-hearted about trials, only providing a single build for the full-strength Trend Micro Maximum Security suite and hoping that would do. This has changed since our last review, though, and the website now has trial downloads for Trend Micro Internet Security and Antivirus+ Security, too.

Downloading is easy, and setup largely automatic. You're prompted to enter your email address at the end of the process to get product news and updates, but this is optional. We left the box blank and the installer didn't complain.

Once setup is complete, the package added an icon to our system tray but otherwise stayed mostly in the background. This is an antivirus which doesn’t get in your way, and most of the time you can forget it's there.

You might want to do a little initial exploring, though, as the default settings may not be quite what you expect. Trend Micro Antivirus+ Security includes a spam filter, for instance, but this wasn't enabled on our system after installation, and it's not clearly highlighted in the interface. We only realized after browsing our Outlook interface, looking for a toolbar, not finding it, and subsequently checking the Settings dialog for answers.

Still, these minor hassles aside, Trend Micro makes it easy to install its core antivirus engine, and the 30-day trial gives you more than enough time to assess its abilities for yourself.

The interface has a friendly and appealing look. There are large animated icons, a big scan button, a clear description of your security status, along with text captions and tooltips to make it clear how everything works. You can even customize the console with a new background image.

Checking the Settings dialog revealed the same focus on clarity, with nothing too intimidating present. Instead of the usual technical jargon, options are spelled out in plain English, like "Prevent programs on portable drives from launching automatically" or "Check if programs try to make unauthorized changes to system settings which could threaten your security".

Experts might wish for more low-level control, but if you're normally left baffled by at least some antivirus settings, Trend Micro's simplified approach could be a refreshing change.

Scanning options are straightforward. You're able to run quick, full or custom scans, where you can specify particular drives or folders to check. There's very little control over any of this, and no Avast-like ability to add other scan types and define precisely how they work. But it's easy to use, and if you're not the type who normally delves deep into antivirus settings, you'll probably be happy enough.

You're able to scan files from their right-click Explorer menu, too, although with some restrictions. We noticed that Antivirus+ Security doesn't support simultaneous scans, and the Explorer 'Scan with Trend Micro' option is greyed out when you're running a scan from the main console. That's probably not something you'll notice often, but it's still a potential nuisance, and not an issue you'll get with the best engineered antivirus (Kaspersky products are able to run multiple scans simultaneously, each in their own window.)

Scan times were a little below average in our tests, and we didn't notice any 'scan only new and changed files'-type optimization to improve performance. No matter how many times we scanned our 51MB of test data, it still took around 14 minutes.

There are several levels of browsing protection. Trend Micro's Social Networking Protection uses browser extensions to display a 'risk rating' of links on popular social networks, for instance (Facebook, Twitter, LinkedIn, Pinterest, Weibo and more.) But there's also automatic checking of URLs before they're accessed, and even if a page passes that test, its content is scanned by the core Trend Micro engine.

URL filtering was better than most, blocking almost all our test malicious URLs. It's unusually configurable, too – while other antivirus programs typically only allow you to turn URL blocking on or off, this one has a 'protection strength' slider which you can turn up to more aggressively block sites, or turn down to reduce false alarms.

Other tools include Trend Micro's Folder Shield, an anti-ransomware module. By default, this watches your Documents, OneDrive and Pictures folders, as well as any connected USB drives, and alerts you about any attempt to modify files by trusted processes. You can add more folders as necessary.

Folder Shield isn't a new idea – Windows 10 now does something similar with its Controlled Folders feature – but it's a welcome extra layer of protection which could block even brand-new undiscovered ransomware.

Trend Micro's Pay Guard aims to provide a more secure environment for carrying out online banking, shopping and other sensitive transactions, making it more difficult for malware to monitor or log what you're doing. This is also a familiar idea, but Trend Micro implements it a little differently.

While Bitdefender SafePay and similar packages create their secure environment within a custom hardened browser, Antivirus+ Security uses your default browser (as long as it's Chrome, Firefox or IE) with its most secure settings. This makes it easier to operate, as you're using a familiar interface, but is it as secure? Probably not, because Trend Micro has much less control over how the browser works, but it's difficult to say for sure.

The real surprise here is the spam filter. Trend Micro doesn't make any effort to highlight this, and unless you browse to the right page of the Settings dialog you might never realize it's there. This only works with Outlook, using POP3, SMTP and Exchange, but once we enabled it, the feature quickly added itself to our Outlook setup.

Whether you'll want to do this is open to question, as we found the filter regularly flagged a large number of legitimate emails as junk. You can tweak this by adding trusted addresses to an Approved Senders whitelist, though, as well as adjusting the filter strength.

AV-Comparatives' real-world protection test is a tough benchmark which pits 18 top antivirus engines against some of the very latest malware. Trend Micro's results in the latest July-October 2019 summary report were very positive, with its test product blocking 99.9% of test threats, placing it third out of 16 contenders.

The package typically raised more false alarms than most of the competition, though, something we've also seen ourselves. Avira topped the AV-Comparatives list with just one false positive across all tests, for instance; Trend Micro had 19. That could translate into a lot of extra hassles during real-world use.

Checking the results from other labs revealed a mixed picture. AV-Test's September-October Home Windows report showed Trend Micro blocking 100% of all test threats and raising only one false positive, against an industry average of four. But SE Labs October to December 2019 Home Anti-Malware Protection report placed Trend Micro ninth out of 15 with a protection rate of 98%.

In our last Trend Micro review, we highlighted the company's disappointing results in PassMark's 2019 Security Products Performance report, which found they had more impact on your system performance than most of the competition.

Trend Micro seems to be addressing this, though. We noticed no performance issues during our test, and PassMark's 2020 Security Products Performance report placed Trend Micro's two tested products (Internet Security and Virus Buster) in sixth and seventh place out of 10. That's still not great, but it's better, and it showed Trend Micro outperforming some significant names (Avast and Bitdefender were even worse.)

To get a more complete idea of the program's abilities, we tested the program with our own custom ransomware simulator. As we've written this ourselves, Trend Micro wouldn't be able to detect the threat from its file signature, and could only rely on behavior monitoring. Many antivirus products have failed this test, but Trend Micro managed another big success. Not only did it kill the process after only a handful of files had been encrypted, but it also recovered those documents in full, ensuring we didn't lose any data at all.

Trend Micro has produced a user-friendly antivirus with some valuable extras including anti-ransomware measures and a spam filter, but experts might be frustrated by the lack of advanced features and configuration options.