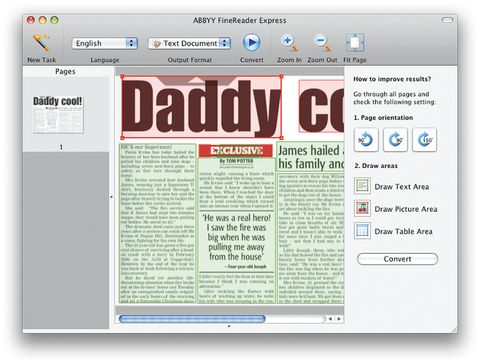 It's not cheap, and no OCR app is perfect, but it does a good enough job to justify investment

Nobody loves doing OCR: it's just a chore that obviates the need for an even more tedious one. So the ideal tool is an app that accepts multiple image formats – scans, screen grabs, PDFs – without complaint, doesn't require you to perform gymnastics with a complex interface, and delivers accurate results in a usable format.

On most of these counts, FineReader scores. FineReader copes adequately with extracting text from harder-to-decipher files, too.

Given a JPEG of a page from a 19th-century book, it made about half a dozen errors in 300 words – certainly preferable to re-typing it from scratch. Presented with a complex newspaper page in JPEG format, FineReader made a few mistakes.

However, its conversion to HTML was pretty good, and oddly its text recognition was better when converting to PDF.

But FineReader's performance with TIFF images was so poor as to be effectively useless. (We tested it with the same image saved into different formats, and it was just TIFF that caused problems; happily, exporting TIFFs to something else – even just using Preview – meant that FineReader coped fine. We asked ABBYY why, but didn't get an answer before we went to press.)

Still, that might be a relatively minor issue to circumvent. There's also good help and solid multilingual support. Its price means that FineReader isn't a casual buy, but for those who use OCR regularly, it'll make the chore a little less miserable.