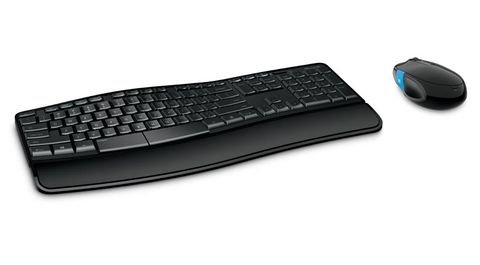 A very competent keyboard and mouse combo that's well made and comfortable to use.

Alongside Microsoft's new Sculpt Ergonomic Desktop kit, it has also released another new set; the Microsoft Sculpt Comfort Desktop. While the Sculpt Ergonomic Desktop goes for a radical design that has been designed for maximum ergonomic safety (to prevent repetitive strain injury and other ailments when working for long periods of time at a computer), the Sculpt Comfort Desktop kit goes for a more traditional design – but with a number of the ergonomic tweaks Microsoft's peripherals have been known for.

Microsoft has been making ergonomic peripherals for 20 years now – its first ergonomic keyboard, the Natural Keyboard, was released in 1994 – and that experience and expertise is very much evident in both the Sculpt Ergonomic Desktop and the Sculpt Comfort Desktop kits. The Sculpt Comfort Desktop kit, as the name suggests, is less fixated on the science behind ergonomics, and instead attempts to marry the traditional mouse and keyboard setup with some of the ergonomic lessons Microsoft has picked up in the past 20 years, to create a keyboard and mouse combo that is as comfortable to use as possible.

Looking directly down at the keyboard you'll see it has a wave design, and while this brings to mind the Windows flag icon of old, is actually designed to keep keys within easy reach of your fingers, minimising the stress of stretching your fingers for hard to reach letters. Unlike the Sculpt Ergonomic Desktop kit's radical split 'manta ray design', where there is a large space between the two halves of the keyboard, the layout on the Microsoft Sculpt Comfort keyboard is far more familiar, which means it won't take you long at all to adjust to the slightly different key layout.

We found that after just a few minutes of using the keyboard we were back to touch typing – and as a testament to the design of the Microsoft Sculpt Comfort keyboard, when we returned to our regular 'straight' keyboard, it only took a few moments before we noticed how much we were stretching our fingers to hit the right keys.

Looking at the keyboard from a side-on view you'll see that the keys are also raised towards the centre in a dome-like shape, which again makes for a natural and comfortable position for your hands and fingers when typing. Another innovation is that Microsoft has split the space bar in half, with one half being the traditional space key, and the other acting as the backspace key. This is supposed to give you even easier access to the backspace (which is traditionally kept in the top right-hand corner of the keyboard), handy if you're a particularly accident-prone typist. It takes a bit of getting used to, and if you're not keen it is easy enough to change to a regular space key as well, thanks to the software you can install from Microsoft's website.

The large size of the space bar meant that we were often accidentally touching it when were typing, which became annoying, however. The keys themselves have little travel, which means they do not depress far when typing. While this helps reduce strain, it might annoying people who prefer a more 'clicky' and responsive feel to their keyboards. If that's the case we'd perhaps recommend looking at a mechanical keyboard such as the QPAD MK-85 or Cooler Master Storm Quick Fire Rapid, which are particularly good for gaming. Along the bottom of the keyboard is a removable wrist rest which helps make typing more comfortable. A number of function keys run across the top of the keyboard, and a quick flick of a switch turns them into shortcuts for Windows 8 devices.

The mouse that comes with the Microsoft Sculpt Comfort Desktop is far more successful, we feel, than the one found in the Sculpt Ergonomic Desktop kit, as it is less cumbersome, and easier to fit in the hand. An indent makes it easy to rest your thumb on when using, and a blue strip along the side lets you replicate some touch gestures when using Windows 8. This is a nice feature, and helps make Windows 8 easier to use when you're relying on a traditional keyboard and mouse setup.

The keys on the keyboard could do with a tiny bit more travel to make typing on them more satisfying – sometimes you're not quite sure if you've properly hit a key when typing fast. While the Windows 8 features are nice, there's not really enough to make us recommend this keyboard and mouse above its competitors – especially if you don't have Windows 8.

Microsoft has produced a very competent keyboard and mouse combo that's well made and comfortable to use. If you suffer from carpal tunnel syndrome, RSI or similar, then the Microsoft Sculpt Comfort Desktop won't be for you, and you'd be better off looking at the Sculpt Ergonomic Desktop kit instead.