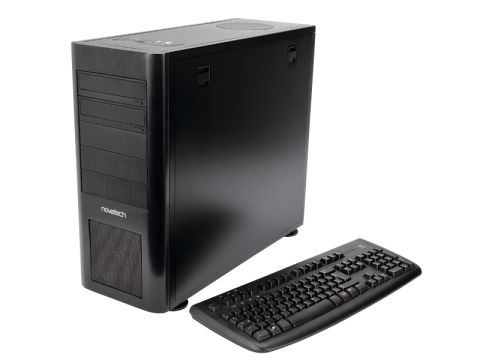 The Novatech Zu (mythical Sumerian dragon for those who fear Google) combines the latest HD4890 graphics card along with AMD's AM3-based quad-core, the Phenom II X4 810.

The choice of AM3 mobo means that we've also got some seriously spanking 1,600MHz DDR3 memory backing it all up. So impressive specs then, so why the slightly weak score?

The way the Phenom II CPUs have managed to capture our collective imaginations in the face of stiff, Core i7-shaped competition has been because AMD offered a cheap, though powerful alternative, chock-full of upgrading potential. Indeed, even jamming the latest AM3 chip and mobo combo with the requisite DDR3 isn't a bank-buster.

The problem with the Zu though is the base configuration. Even with Vista Home Premium you've also got the added expense of the Blu-ray drive. If you're after a Zu as a gaming machine then that unfortunately is wasted money. Money which you could easily use to fund an improved GPU that would give you the performance benchmarks you need to justify the price-tag.

You can pick up the Zu without OS for £899, and nestling here it's a more realistic option if you've already got an OS waiting. Still, it's garnering worse performance figures than AdvanceTec's Intel Q8200-based Wahdita, which is only a little more expensive than this option; performance and price increase both mainly down to its 4870x2.

With Windows 7 so very close though, and so far so very worthy of an upgrade, you'll likely be rapidly replacing whatever version of Windows comes with your next PC if you buy in the next few months. But if you're a real hi-def obsessive, and still lack the PS3 in your lounge, then that Blu-ray drive may seem a benefit rather than a drawback.

And while the 4890 is a very decent card, it's this that is unfortunately dropping performance below what we've come to expect from a £1,000 rig. A little cheaper then and we can talk more…