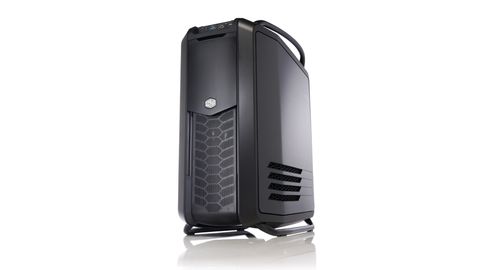 When the price of a new PC starts creeping north of the two-grand mark then you're going to want to start seeing some pretty impressive performance. For that sort of cash you also want a machine that doesn't just look like some wee beige box sitting under your desk.

Chillblast's Fusion Cosmos ticks all the performance boxes and the awesome Cooler Master Cosmos 2 chassis that houses this beast of a machine makes it one hell of an imposing rig too.

The scale of the case is hard to get across in the image above. To try to get it in context, it made our chunky 30-inch Dell 3007WFP test screen look like a diminutive 22-inch panel.

To be fair, you don't want your two-grand PC to be a shy and retiring type that hides beneath your desk. You want people to know it's there and realistically you're going to struggle hiding this thing away.

But that means Chillblast can pack in one of the best dual-GPU setups around without any concerns about having enough airflow to keep it chilled.

The overclocked Intel Core i7 3770K gives the Chillblast Fusion Cosmos the top Ivy Bridge honours and is the reason it bests the Overclockers UK machine's Sandy Bridge chip running at the same overclocked clockspeed.

It's the twin GTX 670s though that take the headlines with this rig, giving it the gaming chops to take any modern 3D engine and run it maxed out at 2,560x1,600.

That said, the CrossFireX pairing of HD 7970s in the OcUK rig is still competitive at this high resolution.