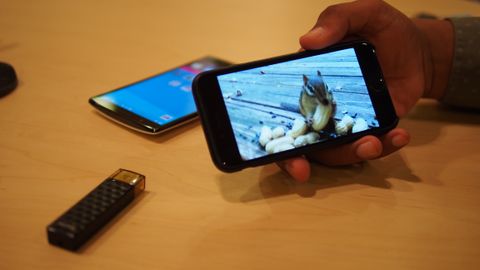 The SanDisk Connect Wireless Stick brings the flexibility and convenience of USB flash drives to mobile phones and devices with a simple and clean interface.

With sales of PCs declining and users increasingly turning to mobile devices to stay connected, productive and entertained, traditional memory-maker SanDisk has been transforming itself to stay relevant. That transformation began with the SanDisk Connect Wireless Flash Drive, and this year the product got slimmer and lasts longer with the Connect Wireless Stick ($29, £18, AU$39).

Like its predecessor, the SanDisk Connect Wireless Stick is a slim USB dongle, about the size of a traditional flash drive, that can be plugged into a USB port to transfer and store files. Measuring 3 inches (7.62cm) long by 0.75 inches (1.91cm) wide and 0.375 inches (0.95cm) deep, the drive has been redesigned to be smaller and slimmer than the Connect Wireless Flash Drive, Susan Park, Product Marketing Manager at SanDisk, told me, so that it could be used on systems with cramped USB ports without blocking access to adjacent ports.

Aesthetically, the Connect Wireless Stick looks just like a USB 2.0 flash drive. There is a removable cap with a wireless logo to identify the drive's unique function, and the drive itself is constructed of a solid, black plastic. The top of the drive has a 3D cube pattern that makes it shimmer when it's angled under a source of light, giving it an artsy and modern feel.

There's a small power button on the right side and a small LED status indicator light is on the top of the drive. On the bottom edge of the drive is a small loop to attach a lanyard.

While SanDisk is known for its USB drives, solid state drives and memory cards, the company is trying to cater to phone and tablet users.

As the smartphone is becoming a mobile computer for many users, Park said, the Connect Wireless Stick is a flash drive for those users. This is important as memory card slots are being trimmed from popular smartphones, with Apple and Samsung focusing on slimmer designs on their latest flagships.

The Connect Wireless Stick starts at $29 for 16GB of storage, and the pricing goes up to $89 (£57, AU$76) for the 128GB capacity. The drive is available in 16GB, 32GB, 64GB and 128GB capacities. The memory is embedded into the drive, and storage cannot be augmented after purchase with a micro SD card. The pricing of the Connect Wireless Stick is on par with the cost of a micro SDXC memory card, with a 128GB memory card.

Connecting to the Connect Wireless Stick

The Connect Wireless Stick will work with iOS and Android devices via an app, a PC and Mac with a full-size USB port or over a web browser for USB-C devices like Apple's new MacBook and the Google Chromebook Pixel.

For mobile devices, you'll need to download the SanDisk app from the App Store or Google Play Store. After the app has been downloaded, you'll power on the drive by pressing the side-mounted power button on the Connect Wireless Stick, ensure that the drive isn't plugged into your computer's USB port and connect your mobile device to the drive's wireless network by going into your phone's Wi-Fi settings.

In my case, I connected my iPhone 6 to the "SanDisk Connect FBF396" network. Upon initial connection, the drive's network will be open, so you won't need a password to join. For users storing secure documents or files, a WPA password can be created within the app under the "settings" menu. Additionally, the drive network name can be changed to something more memorable, like "Chuong-TechRadar-Network."

On the iOS version of the app, you'll still have the ability to access the internet over your iPhone's 3G or 4G connection even when you're wirelessly connected to the Connect Wireless Stick's ad-hoc Wi-Fi network. Internet connectivity is slightly different for Android users.

To gain internet access while connected to the SanDisk drive, Android users will need to navigate to the app's setting and connect the drive to their local Wi-Fi network. If you go off this network, then you lose the dual-wireless connectivity, but it's a limitation of the Android operating system.

For Mac and PC users, you'll need to connect your computer to the drive's wireless network, and then go to http://www.sandisk.com/myconnect/ from a web browser. For computers with a full-size USB port, it's still simpler to plug the drive into the USB port, but this wireless option allows devices like the MacBook to have access to the content of the drive without requiring a USB adapter for the USB-C port.

Apps for Android and iOS

When you launch the mobile app, you'll be presented with a list view showing the major folders on the drive. Several photos are already pre-created, but you can also create your own folders to better organize content on the Connect Wireless Stick. Ram Rajagopalan, SanDisk's UI designer for the Connect Wireless apps, said that this view is similar to a file tree or file browser, but is made with larger buttons optimized for touch input on mobile devices.

In my testing of the drive, I found the experience to be very responsive, and photos and files copied quickly between the drive and the mobile device using the drive's wireless connection. Wireless file transfer speed is about as fast as wired transfer speeds with the drive plugged into my Dell Latitude 12 7000 (E7250)'s USB port.

On iOS, within the Camera Roll of the Photos app, I could use the iOS Share Menu to upload and share photos directly to the drive. Once the Share Menu is activated, you'll be presented with where you'll want to upload the photos with different pre-created folder options for Music, Photos and Videos on the drive.

iOS allows eight photos to be shared in a single batch with the SanDisk Wireless Connect Stick. If you have ten photos that you want to offload from your camera roll to your drive, you'll need to do a batch with eight and a second batch with two photos.

On iOS, you can even configure the Connect Wireless Stick to automatically backup photos from your phone's camera roll. This is a convenient feature that's offered on cloud storage services, like Google Photos and Microsoft OneDrive.

With documents, the drive allows users to view, but not edit. For a Word document that I had stored on the drive, when I choose to open it, iOS showed me which apps on my device can handle that file format. The process is a bit complex, requiring several taps.

The Connect Wireless Stick only works wirelessly when it's not plugged into the USB port on your PC or Mac. Once you plug the drive into your computer's USB port, the wireless function would shut off, and the drive will begin charging. Rajagopalan says that this is a design limitation to prevent file corruption so that these different device types won't be writing to the drive at the same time.

However, multiple devices can read the same file simultaneously. In my demo of the Connect Wireless Stick, Park showed me an iPhone 6, iPhone 6 Plus and Nexus 5 all wireless connected to the drive at the same time. Furthermore, Park played the same video files simultaneously on all three devices.

The Connect Wireless Stick can connect to up to three devices at a time.

SanDisk rates the Connect Wireless Stick for up to 4.5 hours of battery life. I asked Rajagopalan if connecting multiple devices simultaneously will have an adverse impact on battery life, but he would only answer that battery life was tested on the wireless stick with a single device connected to it. Typically, with competing products, like the Kingston MobileLite Wireless G2, battery life drops quicker with more connected devices.

Even though the drive will shut off the wireless radio if it's plugged into your computer's USB port, plugging the Wireless Connect Stick into a USB power adapter or a battery pack will not have the same effect. If you connect the drive to a battery, you can extend the battery life of your drive for longer road trips, work meetings or airplane flights if you find the 4.5 hours to be limiting.

The drive takes about two hours to charge.

The SanDisk Connect Wireless Stick comes in at an even lower price than the model it replaces. With a starting price of just $30 for 16GB of storage, the Connect Wireless Stick comes in at three times the cost of a non-wireless drive, but is more versatile as it will work across multiple device types. The premium is well worth it if you live on your mobile device and need an easy way to access, backup or store your files without having to trust the cloud.

A slim design and artsy trim hides the star feature of this USB flash drive: wireless connectivity. The SanDisk Connect Wireless Stick is a simple device that does its job with fast file transfers, reliable connectivity and an intuitive user interface for the accompanying mobile apps.

There is not much to dislike about the Connect Wireless Stick. SanDisk managed to deliver a fully functioning wireless flash drive for the post-PC era while still staying within the constraints of the iOS and Android platforms. For Android, that means a cumbersome way of attaching the drive to a trusted local network in order to gain internet connectivity while staying connected wirelessly to the drive, and for iOS it means sharing and transferring files between your iPhone and the drive can be a bit convoluted given the lack of a true file system on Apple's mobile operating system.

The biggest downside with the Connect Wireless Stick, and any wireless drive or media streaming device for that matter, is that you must remember to charge yet another device every night. Even though the drive is highly portable, it's also another device that you'll need to remember to carry with you in addition to your phone, keys and wallet or purse. If you're working with larger files, the USB 2.0 transfer speeds when connecting to your computer can slow things down a bit.

If you have sensitive files and don't trust cloud storage systems, the SanDisk Connect Wireless Stick is a dual-purpose USB flash drive that serves to accommodate users of the PC and post-PC generation. As a USB drive, the compact flash drive delivers capacities up to 128GB, while as a wireless drive it allows users to back up contents from their phones and tablets to free up valuable storage space on their mobile devices. The Connect Wireless Stick is a future-proof device, as it works with traditional PCs and Macs as well as the uni-port MacBook and smartphones. At $30, it's an extremely affordable way to save, store and share files wirelessly between multiple devices.