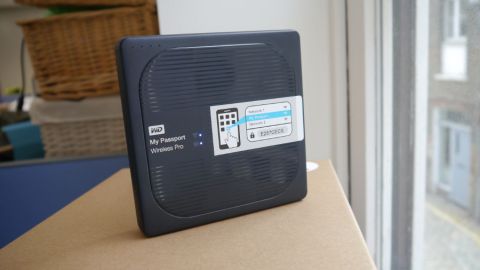 Western Digital's Pro drive is a much better proposition than the vanilla My Passport Wireless. Yes, it is more expensive than its predecessor, but it is a better product on almost all counts.

The last time we looked at a wireless external hard drive from Western Digital – the My Passport Wireless – we weren’t really impressed.

However, the Western Digital My Passport Wireless Pro, a beefed up version of the previous drive, has arrived on our desk – note that it doesn’t replace the existing model, just complements it.

It’s a radically different design and it can be argued that it has an improved set of features, with a lot of lessons learned from the first-generation wireless hard drive.

The Pro title and the wording of the product description on Western Digital’s website makes it clear that this drive is aimed at a prosumer audience,one that doesn’t mind paying extra if it means ‘streamlining your workflow’ as WD puts it.

The My Passport Wireless Pro reminded us of an external DVD player or the Voyo V3 mini PC. Think about it – it's about the same size as a DVD disk with dimensions of 125 x 125 x 22mm, and it weighs 450g.

The drive is made of anthracite-coloured ABS plastic with plenty of rounded corners, and it feels solid.

On top there's the WD logo and six status lights: four to indicate the battery capacity, one for the Wi-Fi status and one to indicate whether the drive is spinning. There's also a removable sticker with the SSID and default password of the device.

Flip it over and on the underside you'll find four rubber feet as well as another sticker with more details about the My Passport Wireless Pro – including the serial number and the MAC address.

An SD card slot is located on one side and two square buttons – one for power and the other one for accessing the SD card – are located on the other, alongside a flat USB 3.0 connector and a standard USB 2.0 host port.

Long press the SD card button and the contents of your SD card will be automatically copied or moved – depending on how the button is configured – to the hard disk drive. In that mode, the lights on top will indicate how far the copy/move process has got to go.

The My Passport Wireless Pro uses a 15mm tall, 2.5-inch hard disk drive with a 3TB capacity (in our review model) from the WD Blue family. The WD30NPRZ runs at 5,400RPM and is equipped with 64MB cache. It consumes an average of 2W in read/write mode and 0.7W when idle. It's worth noting that the average drive read time stands at 8.5ms.

The drive performed quite well on CrystalDiskMark, hitting 121.9MBps and 120.9MBps in read and write respectively.

That's better than the drives we tested last year and likely to be due to the higher platter density which allows more bytes to be crammed in per unit volume/area.

Sadly, we couldn't get our Windows 10 test machine to connect with the drive wirelessly, either on the 2.4GHz or 5GHz channels. That was likely an issue with Windows rather than the device.

The drive offers 802.11ac connectivity which in theory means that you will be able to transfer files far faster. You will obviously need to have compatible devices to make the most of it.

The Wireless Pro also comes with a massive 6,400mAh battery which can be used as a power bank. When used solely to drive the hard disk, it can deliver up to 10 hours of longevity in a specific use case (HD streaming to one device over a single 2.4GHz band).

Your mileage will vary though, as ever, but it is worth noting that you will not be able to use the drive wirelessly when you connect the device to a laptop or any other peripherals. However, Wi-Fi does still work when the My Passport Wireless Pro is connected to an emergency power bank.

We strongly advise you to install the WD apps on the Wireless Pro (Backup and Access). Once you manage to connect to it over Wi-Fi, head over to http://mypassport to configure your drive.

One thing we noted when testing the device is that it vibrates a fair bit. We also observed a sharp, difficult to describe, sound that occurred frequently when switching Wi-Fi on and off; outside of that, the My Passport Wireless Pro was quiet. This didn't have any impact on performance and is likely to be an issue that can be ignored.

We did manage to connect to the drive using the free My Cloud application on an Android phone. From there you can change a number of parameters including what happens when you insert a USB stick (or a DSLR camera or another external hard drive) or an SD card.

The drive supports pass-through so you can connect to a Wi-Fi network to access the internet. Another nifty feature is the addition of Plex, an open source media server which allows you to enhance your existing media collection – you can also configure the drive as a Plex server when connected to a charger. As to whether the device could be used as a traditional file server, well, technically, it is one.

The My Passport Wireless Pro is also compatible with Adobe's Creative Cloud solution and supports up to eight devices, so it's ideal for small networks as an internet hotspot.

It's probably far cheaper to get a couple of devices to replace the Wireless Pro (a hard drive coupled with a hotspot/battery/card reader), but if you go that route you don't have the elegance of an integrated solution.

So for the target audience (photographers and videographers), the My Passport Wireless Pro is a great, if not perfect, match. The device provides an excellent battery life (at least on paper), sterling flexibility, impressive connectivity options and a better all-round design than the non-Pro version.

The addition of Plex is an interesting feature and we'd like to see more of this sort of thing in the future.