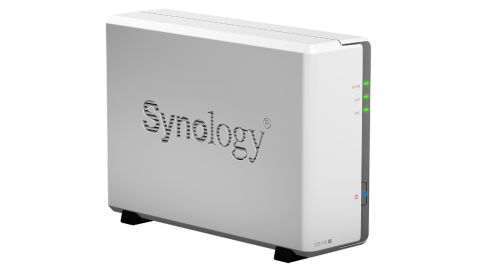 With the extendable software, the DS115j can be used as a basic network server, capable of a vast number of functions such as file downloads, DNS, web hosting and so on. Many other devices do this too, of course, but the intuitive DiskStation Manager software makes setting it up pretty straightforward.

Performance is good enough, and it's great value too. While USB or eSATA disk enclosures may cost slightly less, a vast majority of them are poorly built cheap designs. And they can't do half the things which the DS115j can manage.

There are limits to what the DS115j can do, mostly due to its single-core processor and limited memory. I expect you'll notice its performance drop off with more than a few users, and while it offers some server functions, this is no replacement for a proper dedicated server.

There are a few issues with its build too. It's rather noisy at times, the plastic is slightly thin and you won't be able to fit any wireless dongle you choose into its USB ports, due to the positioning of the power connector. The USB ports are only USB 2.0 as well, which means only 802.11n dongles will attain their full transfer speed, rather than 802.11ac variants.

And while I see the lack of RAID as a blessing, due to the extra simplicity it brings, some people might want the redundancy of other modes you get with multi-disk NAS devices.

Given what you get for your money, I'd happily live with the few negative aspects of the DS115j. Granted, it's not the most powerful NAS money can buy, and while it offers a truckload of features, traditional network file sharing is still the bread and butter of NAS units – though fortunately it does well enough here, too.

As long as you don't mind white, the DS115j is a great looking, compact gadget. It's straightforward to set up and easy to use. The DiskStation Manager software is brilliant.

While it doesn't offer any specific feature that isn't provided by other NAS units, it presents its feature set in a far superior manner to nearly every other NAS going.