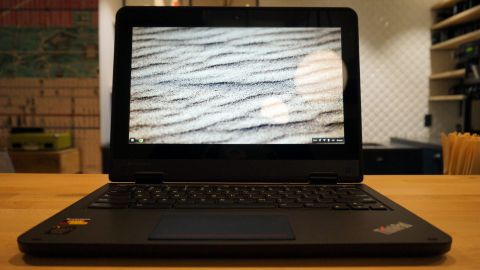 The ThinkPad Yoga 11e sports a rugged and flexible design, an excellent keyboard and booming speakers. If only the thing didn't cost almost 500 smackers at checkout.

Lenovo, the folks behind the original flip-and-fold, 2-in-1 laptop design with the first Yoga, brought the rotating screen to the Chromebook market with the Lenovo N20p. That stylish notebook could rotate its screen almost – but not quite – 360 degrees. Now, the company comes full circle with the Lenovo ThinkPad Yoga 11e, the first Chromebook with a fully flippable lid.

The Yoga is also one of the few Chromebooks on the market with a truly rugged exterior. Designed for use in rough-and-tumble classroom environments, the laptop boasts rubberized edges and extra-strong hinges. At $455 (about £291, AU$739), however, the Yoga 11e is more than twice as expensive as most Chromebooks – $100 pricier than the N20p. Is this machine's combination of flexibility and durability worth the price?

The Yoga 11e sports the same minimalist aesthetic as other ThinkPads, featuring a matte black plastic chassis and few adornments other than a silver ThinkPad logo at the upper left corner of the lid and another at the bottom right corner of the deck. The lid tapers at the edges, giving the laptop a slightly rounded look when closed, and a green LED along the leading edge of the lid glows when the Wi-Fi is enabled.

Like most Chromebooks, the notebook's port selection is fairly limited. On the left is a USB 2.0 port, a 3.5mm headphone jack and a 4-in-1 card reader. An HDMI port and USB 3.0 port are located on the right.

As with other notebooks in the Yoga series, the lid of the Yoga 11e can rotate 360 degrees to lie flush against the bottom of the laptop. This flip-screen design lets you use the device in four modes: traditional laptop mode, tablet mode (folded completely backward), stand mode (placed keys-down on the table) and tent mode. This final mode sees the Chromebook at a 270-degree angle, standing on the edges of its lid and base.

Rotating the screen automatically disables the keys on the keyboard, ensuring that you won't begin typing accidentally when using the Yoga 11e in tablet mode. Lenovo also placed the power button and volume rocker on the side of the notebook rather than deck, meaning you can reach both buttons even when the screen is flipped around.

While the Yoga 11e is comfortable to hold as a tablet, I found its utility in this mode limited. The Chrome OS interface features dense clusters of small buttons, particularly in the upper right corner of the browser, that are tricky to touch accurately. Moreover, many websites haven't been designed with a touchscreen in mind. In general, I found it easier to navigate the interface with the cursor than with my fingers.

Ruggedized for those rascals

Unlike most Chromebooks, the ThinkPad Yoga 11e was built to withstand the rigors of the classroom. Rubberized edges on the lid protect the laptop from unexpected drops, and extra-thick bezel minimizes damage to the LCD panel. In addition, Lenovo strengthened the hinges to endure more than 50,000 cycles of opening and closing.

Next Page Performance, specs and features