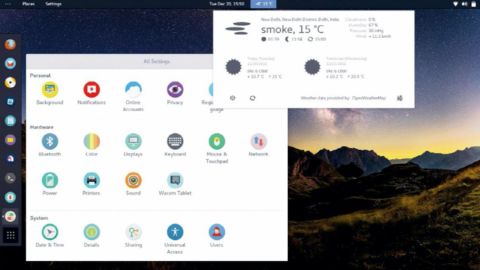 Ideal for new users who want a distro that doesn’t require too much effort before being considered usable.

This article was provided to TechRadar by Linux Format, the number one magazine to boost your knowledge on Linux, open source developments, distro releases and much more. It appeared in issue 220, published February 2017. Subscribe to the print or digital version of Linux Format here.

Starting from an application-rich and highly stable distribution (distro), Korora offers the latest packages and modern technologies as its base, with many extras on top to make it appetising for new users. The end result is a user-friendly distro that’s usable out-of-the-box.

Understandably, Korora decided to do away with 32-bit images in its last release and has chosen to stick with that decision with the latest offering, codenamed Gurgle. But after the backlash over its decision to not offer a KDE spin with the previous release, Korora 25 once again offers users the option to download Gnome, Cinnamon, KDE, Mate and Xfce spins. Users already running a previous 32-bit release can still upgrade to the latest offering and the website offers a guide on how to do so.

Despite including some third-party proprietary offerings, Korora is entirely open source and you can download its entire source code from its Git repository (repo). Like its parent, Korora uses the Kickstarter scripts to produce its releases. The distro also ships with the home-grown kp tool, which users can use to manipulate the Korora code to produce a remix distro of their own.

With the exception of a handful of tips and tricks and some guides on updating and upgrading the distro, the project doesn’t offer much by way of documentation, perhaps because much of it would be a duplication of the Fedora team’s effort. Regardless, users can turn to Engage, the community portal that one can traverse for answers to problems or join in discussions with fellow Korora users.

Barring the desktop-specific tools, the various spins all offer the same set of default packages. While this selection might not find favour with all users, the distro has struck a fine balance between utility and bloat. But that still doesn’t explain the inclusion of some highly esoteric tools such as Planner for project management, Darktable photo editing suite, and Handbrake video transcoder.

Generally speaking, Korora ships with one popular tool for each task, such as offering VLC across all spins as the default multimedia player. But you can easily install software using the package management tools and this is where the spins differ.

For the Gnome spin, users have the choice of either Gnome Software, YumExtender or Packages. Of these, YumEx and Software both sport a well-designed user interface and are quick to offer suggestions. You can also easily browse through the various software categories such as Education, Games, Internet and so forth, which makes it easy to locate the apps you wish to install.

Of the lot, the Gnome spin appears to offer more functionality than the others. For instance, you can right-click the desktop and click ‘Settings’ to launch the Control Center from where users can configure various essential elements such as privacy and sharing, apart from the usual fare i.e. network, security etc. For example, under Privacy, users can determine how long they wish to retain the history, enable location access, which would allow apps to use Wi-Fi to determine your location and even purge trash and temporary files.

In contrast, the Control Center on the Mate spin enables you to access all the usual configurable elements but doesn’t offer the option to tweak Privacy or Sharing settings.

With ease of use as its greatest feature, Korora is ideal for new users who want a distro which just works out-of-the-box, but it offers no reason for Linux pros to ditch their current favourite.