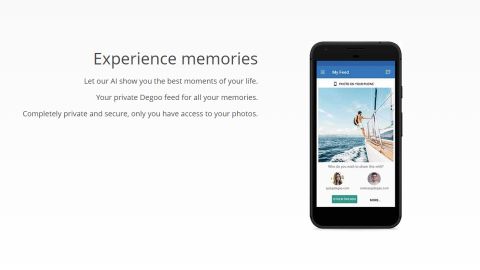 Degoo isn’t a cheap storage option, and the desktop software needs to be much better, but it does offer a high degree of security and decent mobile apps.

Cloud storage has entered a much more competitive phase in the past few years, with the domination of the larger providers being challenged by smaller and more agile competitors.

One of these is Degoo, a Swedish business that only began in 2012 but has already attracted 15 million users.

What makes another 20,000 people a day join those who already use this innovative solution?

If you want to experience a flavor of what Degoo cloud storage offers, you can get 100GB of free space for use with a single device just by signing up. Referring a friend snags you another 3GB each time up to a maximum of 500GB, should you have that many friends.

Beyond the free allocation are two paid tiers: Degoo Pro and Degoo Ultimate.

The latter represents plenty of space for most people, and there are no restrictions on the number of computers or mobile devices you can connect with one account.

Only a few months ago the same service came with 2TB of capacity, so Degoo has improved its top-tier offering significantly since then.

Some cloud storage is focused on file sharing, while other services concentrate on securing data to offsite storage, and Degoo aims primarily for the latter objective.

While it wasn’t built for distributing content to others, you can file share using the Degoo mobile apps, curiously.

Whatever you decide to do with it assumes that you don’t have more than 10TB of data on the systems that you want to share or backup, because that’s the maximum amount of space you can have on Degoo.

Where this service is weak when compared to the likes of CloudBerry or Backblaze is that the backup mode desktop utility for Windows PC and Apple Mac is remarkably primitive.

There is no ‘live’ backup mode, and it can’t image a system to the cloud or restore without a running operating system.

Not all solutions have those facilities, but this one doesn’t even have a user-controllable scheduler to define hourly or daily backup routines at specific times.

You can initiate a manual backup, or you can wait 24 hours, and it will sync again if the computer is on, but that’s not a very friendly means to secure important data.

You also can’t get back that data without installing the desktop app, as there is no web interface to the files you have secured online.

One of the few positive things we can say about this application is that you can target any folder to be secured, even network connected ones with the paid service. And, the default mode will not delete files from the backup that you’ve removed locally.

Compared to the limited desktop experience, the mobile applications (iOS, Android and Kindle) are a dramatic improvement, and provide the level of functionality most customers would reasonably expect, and maybe a bit more.

Phones and tablets generally have some integrated cloud backup functionality for common files (like media) by default, but the Degoo mobile applications allow any folder to be targeted.

Being able to back up apps and their data is a very handy ability for those who change devices regularly or need to remove a lost device quickly.

And the killer feature of the mobile apps is the ability to access files backed up from a computer onto the cloud, and then send the URL of the location/file to others for sharing purposes.

Until recently you could not share with the desktop app, but this is a new feature that has just been introduced.

Degoo has informed us that more changes are coming to the desktop application, with a major overhaul planned that will improve functionality, performance and reduce impact on computer resources. These enhancements will hopefully address some of the desktop app’s shortcomings going forward.

From a security standpoint, Degoo ticks most of the boxes, although it’s worth pointing out that the best aspects of the service aren’t available in the free trial, but only with the paid tiers.

What Degoo provides at all tiers is a decent 256-bit AES encryption that is applied to data in transit and at rest in the storage facility.

Normally the keys for this are held exclusively by Degoo. But, if you use the ‘Top Secret’ folder, then you can create a password known only to you, and not Degoo.

This type of zero-knowledge encryption is generally considered the best, as even if Degoo is hacked the key can’t be acquired from the company.

It would be better if Degoo hadn’t segmented the storage in this way, and allowed you to encrypt everything from the outset, but anything placed in the ‘Top Secret’ folder should be very safe unless you forget the password.

We’d prefer Degoo had its own 2FA, but support through Google is better than nothing for those who don’t like the idea of using zero-knowledge passwords.

Degoo has also made strenuous efforts to harden its facilities against physical incursions and distributed them across four continents for good measure.

As these systems go, Degoo can be rapid. In our testing, it utilised a sizeable chunk of available bandwidth for uploading and the same for downloading.

But getting that performance is dependent on activating ‘Turbo’ mode, which we estimate can easily be 30 times quicker than the Normal mode in some circumstances.

Therefore, Turbo Mode is the way to go, if you don’t have other users and services to consider, and you are using the paid tier.

The downside of this option is that it is much more memory and processor intensive, and this could impact on the usability of the computer while a backup is running.

Perhaps a sliding scale from Normal to Turbo might have been better for those with lower performance computers.

The other performance-related factor is that we believe this service doesn’t use block level transfers. That would be important if you have a large 5GB file, for example, and you change a single byte, it will send the whole file to the internet on the next sync.

It will at least only copies to the cloud those files that have changed, but it could easily be more efficient.

With the new 500GB Pro tier, Degoo is less expensive than it once was, but it’s still not cheap when compared with some services. However, the 10TB plan is remarkable value for money for those who have lots of files that they need to reliably secure.

The bigger issue here is getting your files to the cloud and accessing them once you get them there.

This service’s lack of a proper web interface, and fully-featured desktop applications, are major hindrances, and ones we hope Degoo will sort out soon. The desktop application needs a major revamp (although some changes are already planned, as we mentioned earlier) and file transfers need to use block-level logic.

On the upside, the security is excellent, and the ability to use two-factor authentication and zero-knowledge keys make this one of the better choices for those who like their cloud storage to be genuinely private. And as a mobile backup solution, it works better than the desktop offering.

On an overall level, all these parts don’t make a holistic cloud storage solution for the customer, but they are moving in the right direction.

If the desktop app was better and offered live file replication, then the lure of 10TB for $9.99 per month could boost Degoo’s user numbers dramatically.

We can see the potential here, though, as Degoo is only a software revamp away from being the best alternative to big-brand cloud storage names.