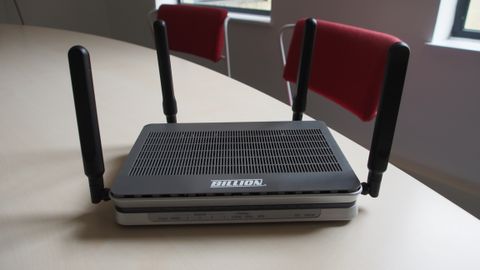 The Billion BiPac 8900AX-2400 won’t win any design awards – but that’s not the point of this router. What it does – and does well – is offer you good and reliable performance with some nice advanced features.

At £280 (around $360, AU$470), this is a reasonably-priced router considering its specifications. It delivers a throughput of 2400Mbps – making it the fastest router Billion has produced, and it does this over two bands – both 2.4GHz and 5GHz.

It also includes a built-in ADSL2+ modem – something many routers do not include (and the ones that do are usually more expensive).  This gives the Billion BiPac 8900AX-2400 router more flexibility, and means you don’t have to have two boxes taking up space – as you can use it to replace the modem.

Anyone who is familiar with Billion products will know that flashy designs are not its priority, and that continues to be the case with the BiPac 8900AX-2400. This is a rather standard looking rectangle, with four bulky antennae jutting out of the side.

The top of the router features vents for keeping the components cool, and the front has an array of LED lights for giving you quick information about the state of your internet connection and wireless network.

So, functionality over form is the ethos here – this isn’t some fancy Google WiFi router, after all. For many of us who hide away our routers anyway, this design won’t really be an issue, and for many people the straightforward look which favors usefulness could we be a selling point.

On the rear of the router is a DSL port for connecting to an ADSL2+ internet connection. A USB 2.0 port is included for sharing devices across your network – or even plugging in a 3G/4G modem. Four gigabyte Ethernet ports sit next to them, along with a fifth Ethernet port for connecting to another modem if you don’t have an ADSL2+ connection. A reset button, and a big on/off button are also included.

On the whole this is a good selection of ports – though we’d have liked to have seen a USB 3.0 port instead of the USB 2.0 port, for faster data transfer speeds if you’re plugging in a storage device.

In our tests the Billion BiPac 8900AX-2400 performed well. Managing 712Mbps from the same room was a decent speed – not quite the fastest we have seen, but a pretty solid performance. Moving into another room affected the speeds with a drop of around 40Mbps, but we were able to improve this by moving the antennae – it is here that the Billion BiPac 8900AX-2400’s external and movable antennae really help.

While wireless performance was good, data transfers when using a USB stick were hampered by the USB 2.0 connection – as we feared.

The setup procedure and user interface is also complicated and not terribly user friendly – this is definitely not a router for beginners.

However, thanks to its solid performance, if you don’t mind delving into the settings and configuring it properly, you’ll be very pleased with the Billion BiPac 8900AX-2400.

The inclusion of an ADSL2+ modem is an excellent feature, and it’s included without upping the price of this router too much.

Ethernet ports are in plentiful supply, and the LEDs on the front give you quick information about the health of your network.

The USB 2.0 port is a bit of a shame considering the other features here, and the design won’t be for everyone. The user interface could be more user-friendly as well.

If you want a good performing, no-nonsense router, then the Billion BiPac 8900AX-2400 is well worth your money. We would especially recommend this to people with an ADSL2+ internet connection, as it can replace your existing modem as well.

Of course, this involves a bit of tweaking – and it’s here that we offer a word of caution: this is an excellent router for people who are confident in setting up networks. If you want a plug-and-play easy-to-use and stylish looking router, this will not be for you.

Don’t let its ugly looks put you off, though: this is a great all-round router for your home or small business.