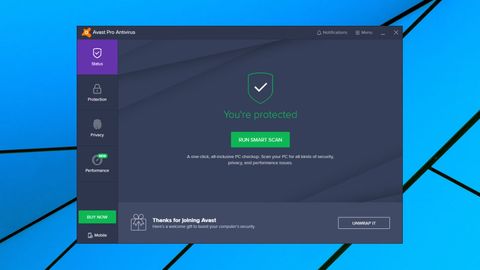 This is a powerful antivirus product, but there aren’t enough extras to justify the price. Use Avast Free instead.

It may be best known for its free antivirus, but Prague-based Avast is a cybersecurity giant which reports 435 million active users and claims to be the number one vendor in consumer security. In 2016, it acquired AVG, and Avast products now combine the best of both technologies.

One problem here is that Avast Free also has many of these features. The main benefit of Avast Pro is Real Site, a secure DNS system which protects from DNS hijacks and stops you being scammed by copycat sites. There's also a sandbox to securely test dubious programs, which could be handy if you're forever hunting down and trying out the latest freeware.

The other issue might be the price, which is an eye-watering $52 for a one-computer, one-year license. Kaspersky Antivirus has better rated malware protection yet costs only $29.24 for the first year, $32.49 on renewal.

Most antivirus vendors demand your email address (and sometimes other details) before they'll allow you to use your software. Avast is more generous, and we were able to download and install a 30-day trial build of Avast Pro Antivirus without handing over any details at all.

The package offers plenty of fine-tuning options for experienced users, and these start almost as soon as you fire up the installer. Hitting the Customize button allows the user to choose exactly which of 16 modules they’d like to install. If you don't need the browser extensions, or you're happy with another password manager, or maybe you know specific modules will conflict with something else on your PC, just clear the relevant checkboxes and they'll be ignored.

Setup was otherwise speedy and straightforward. As well as installing Avast Pro Antivirus, the setup program also added the Avast Online Security extensions to our Chrome and Firefox setups, and the browsers prompted us to enable the extensions when they were next launched.

There's an unusual privacy-related touch at the end of the process. As with many other products, Avast Pro Antivirus collects (non-personal) information about its use, but the company doesn't just opt you in to this scheme and hope you won't notice. A detailed message explains what happens and why, and how you can turn this feature off.

The installer does its best to market a few other Avast products before it closes. It suggests you enter your email address to get a download link for its free Android apps, for instance. It asks you to recommend Avast to your friends, and maybe earn a free license. But skip both of these, then the package finally opens and there's nothing else to do. Avast doesn't even prompt you to reboot: you can just carry on as normal.

Checking the Avast program folders revealed approaching a Gigabyte of files. That's more than many competitors, but it's no great surprise with Avast's many features to support, and it doesn't seem to be reflected in the package's general resource requirements. Avast Pro Antivirus added five background processes to our test PC, only two of which did anything significant, and all five used typically under 75MB of RAM.

Avast Pro Antivirus uses much the same interface as its free version, and indeed other commercial products. An opening screen displays your security status, there's a Smart Scan button to check your system, and a left-hand sidebar organizes the program's other functions into well-chosen categories (Protection, Privacy, Performance).

Some of this works well. The virus scan is relatively speedy and found our malware samples without difficulty. The network check-up is intelligent, too, and can identify a range of low-level but important issues with your setup (a router with ports which are unexpectedly open to the internet, for instance). The software updater noticed we weren't using the latest CCleaner, Firefox and WinZip versions, and offered to update them for us.

Other elements aren't as useful. We were surprised to see Avast suggest we remove the Private Internet Access add-on because it had a 'bad reputation'. PIA is a legitimate VPN provider, and at the time of writing the extension has a 4.1 rating on its Firefox Add-ons page.

If an antivirus product is going to tell us to remove a browser extension, we would like to have more supporting evidence (indeed, any evidence at all would be a start).

The Performance Issues page is even more annoying. This lists all the usual items you'd expect from a PC cleanup tool – junk files, leftover registry items, programs slowing down your computer – but to do anything about them, you must install and pay for the separate Avast Cleanup Premium (or at least take the free 60-day trial).

There's more upselling at the end of the Smart Scan, when the package offers to check your internet privacy, and then recommends you sign up for Avast's SecureLine VPN.

Fortunately, heading off to the Settings dialog allows you to customize the Smart Scan to check whatever you need. We turned off the Performance Issues and Browser Add-ons check, the pointless alerts disappeared, and the scan completed in less than half the time.

You can also ignore the Smart Scan entirely and head off to the Scans panel, where you'll find options to run a quick or full system scan, check specific files or folders, or schedule a boot-time scan. You can also check files, folders and drives directly from the File Explorer right-click menu.

One particular highlight is the ability to create your own custom scans. If you need something which will only run an in-depth scan of Office documents in specific folders, for instance, you could build and save it in just a few seconds. This can then be run on demand, or you can schedule it to run automatically, even when you're not around.

A separate Rescue Disk feature creates a bootable environment for cleaning badly infected systems. Avast can write this directly to a USB key, or save it as an ISO image for burning to CDs or DVDs, or for use with your preferred tools.

Network-related features include the Wi-Fi Inspector, an interesting tool which scans your current network, lists all connected devices and recommends solutions to any issues it finds (close open ports, replace a weak password with something more secure, and so on). It's a rare antivirus extra which, if it wasn't bundled with the program, we'd suggest you download anyway.

There's a further network bonus in Real Site (formerly known as Secure DNS), which configures your system to use Avast's secure encrypted DNS system. This prevents attackers from snooping on your DNS traffic, or redirecting it to a malicious site which tries to fool you into thinking it's the original.

A basic password manager uses Chrome and Firefox add-ons to automatically collect new passwords as they're entered, then syncs these across your devices, and can fill in login forms for you later. It can't match the functionality of market leaders like Dashlane, but that's no great surprise, and it works well enough for a bundled extra.

A few of the features turned out to be yet more examples of Avast upselling. A SecureLine VPN icon seemed promising, for instance, until we clicked it and realized it was a premium feature. There's a 60-day trial available, which is actually very good for a VPN, but after that it's an extra $1.94 a month.

There were also plenty of plus points, though, with the most recent addition being Avast's Do Not Disturb mode. Add any applications to the Do Not Disturb list, and when they're running full-screen, Avast will hide all notifications from itself, Windows and other apps. It's a major improvement on the Game Mode you'll sometimes get with other security apps, and a welcome addition to the package.

The other major Avast highlight is its extreme configurability. Just about every aspect of the program can be tweaked, customized and adjusted to suit your needs. Whether you're looking to troubleshoot problems, minimize conflicts or just improve operations, there's something for you here.

To verify the results we also checked the February-June 2018 report, a summary of five separate tests. This time Avast made it into 9th place with a similar protection rate of 99.4%, close to several other big names (Symantec was 7th with 99.5%, McAfee 6th with 99.6%, Avira 5th with 99.7%).

AV-Test's July-August 2018 Windows Business test reported marginally better results, with a perfect 100% protection rate in August, and 99.55% in July. AV-Test says the industry average is 100%, but that's near enough that Avast still scored 6/6 for protection, and was one of those given the Top Product award for that test.

There's no way we can match the depth of the lab tests in a single review, but we also wanted to explore Avast Pro Antivirus a little further with a small test of our own.

We've created a very basic ransomware simulator which spiders through a folder tree, searching for and encrypting many common file types. As this threat hasn't been publicly released, Avast won't have seen it before, and running it allows us to see whether Avast can recognize the danger by behavior alone, and how quickly any threat can be stopped (the slower the response, the more files may be lost).

We closed our internet connection to make sure we were testing the local package alone, launched the simulator, and hoped to see some kind of detection alert. Unfortunately, our hopes were in vain, and the app was allowed to encrypt thousands of files in its test folder tree.

Other vendors have done much, much better. Bitdefender and Kaspersky antivirus not only detected and killed our simulator process within seconds, but they also recovered the handful of files it had managed to encrypt, ensuring we didn't lose any data.

Still, these results should be treated with care. We think products which pass the test and detect our simulator deserve credit, but failing to raise an alert doesn't necessarily indicate a major problem. Our simulated threat wasn't real malware, after all, and we don't know for sure why it wasn't detected.

What we can see from the independent testing labs is that Avast detects and blocks most real-world threats, even undiscovered ones, from their behavior alone, and those are the results which matter most.

Avast Pro Antivirus is crammed with features and can be very accurate, but all of its best bits are already available in Avast Free. Unless you need the sandbox or secure DNS, we'd opt for the free edition instead.