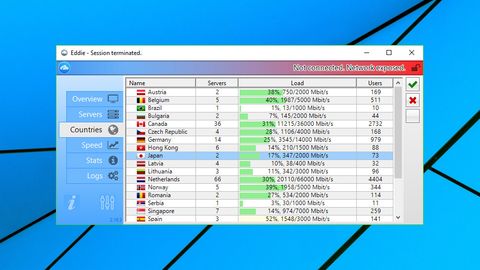 A smart VPN choice for anyone who'll use its expert-level settings, or would just like to sign up with an open and transparent VPN for a change.

Some VPN companies market themselves on features, others on price, but AirVPN heads its website with a plea for your trust, claiming to be "operated by activists and hacktivists in defense of net neutrality, privacy and against censorship."

Anyone can say they're different, but AirVPN shows it, too. An About Us section explains the background to the company, while the Mission page lists other privacy projects AirVPN is developing and funding (IPLeak.net, an online encryption tool, a net neutrality monitor, more), and highlights other projects it funds (Tor, Electronic Frontier Foundation, WikiLeaks, more.)

The AirVPN network is modest, with 242 P2P-friendly servers in 22 countries. The company is unusually transparent about these, though, with a status page which lists them all up-front, displays their current load, and presents low-level details like the top 10 users’ speeds and session traffic.

An expert-friendly Specs page covers a host of interesting low-level technical details that are often very difficult to find: encryption types and standards, available ports and protocols, DNS server details (AirVPN has its own), entry IP addresses of each VPN server, and more.

AirVPN has a decent set of apps, covering Windows, Mac, Linux and Android, with guides to get it set up on iOS, routers and more. (There's support for up to connecting up to five of these devices simultaneously.)

And if you're wondering if there are any hidden catches, good news: AirVPN has some busy forums where you can read what real AirVPN customers are talking about.

AirVPN is up-front about its no-logging policy, saying clearly that it doesn't monitor or track any of your online activities. The company also states that it complies with European Union privacy directives, and any servers located outside the EU will treat your data with the same or higher levels of privacy and data protection.

"Technical data which are strictly necessary for the Internet / networking connections that are specifically related to the Air service are handled by automatic systems only in RAM and only for the time being necessary to provide the service. Activity traffic and/or traffic content and/or IP addresses of the customers or users are not inspected, logged or stored into any mass storage device."

So, there's no activity or session logging, and any other information which might be necessary - counting active sessions to police the five-connection limit, for instance - is only stored for as long as you're connected.

This all sounds good to us, and overall we see no reason for concern. But we would still like to see AirVPN follow TunnelBear, VyprVPN and others in allowing a public audit of its service to verify what it's doing.

AirVPN provides far more client options than we've seen with anyone else. For example, the Windows download page has builds for specific OS versions (XP through to 10), in 32- and 64-bit flavors, and in installable or portable forms.

The AirVPN Windows client doesn't have the graphical style of other VPN apps. There are no rounded windows, no hi-res icons or animated buttons. It's more like a regular desktop application, with multiple tabs and densely packed tables of information.

The client is still easy enough to use. At a minimum, tapping a 'Recommended server' button connects to the fastest server for you and desktop notifications keep you in touch with what's happening. Once you're connected, the client displays your country, city, assigned IPv4 and IPv6 addresses, and current upload and download speeds.

The location list delivers a stack of details about each server: name, city, country, latency, capacity (1000Mbps or 100Mbps in a few cases), load, and the number of connected users.

The list is a long one, as it contains every available server, but there are ways to customize this. You can add servers to a Blacklist, ensuring they'll never be displayed (all the Hong Kong servers if you'll never connect to them, for instance.) Or you can add servers to a whitelist, effectively a favorites system, where you'll only see your preferred options.

Advanced extras include the ability to see the OpenVPN setup commands for each server. That's a very convenient way for OpenVPN experts to check out what's happening under the hood.

There are plenty of stats on hand, with details available on AirVPN's load per country, speed charts, and all kinds of technical information on your current connection.

If you think that sounds advanced, just wait until you see the settings, where AirVPN provides more fine-tuned comprehensive control over operations than any other VPN app we've ever seen. By far.

Take the kill switch, for instance (a system to block internet access if the VPN drops.) Most apps have, at most, a checkbox to turn it and off. AirVPN gives you options to block or allow incoming or outgoing traffic separately; there are options to allow local network traffic, pings or DNS queries; you can add custom IP addresses that won't be affected by the block; and you can even choose how the kill switch will work (by using the Windows Filtering Platform, or the Windows firewall.)

That's just the start. Other tabs allow you to configure proxy and Tor support, Windows routes, custom DNS servers, the network layers you'd like to pass through the tunnel (you could alternatively block IPv6 traffic or send it outside the tunnel, for instance), add extra OpenVPN directives, even run specified commands at particular program events (launch an app when you're connected, perhaps, or close it when a session ends.)

This isn't always easy to follow, even if you're a VPN expert, but if power and configurability is high on your priority list, the client is worth a closer look.

Not using the Windows client? It's a similar story elsewhere. Mobile VPN apps often have a bare minimum of features, but AirVPN's Android offering has more settings than many desktop competitors.

AirVPN's Windows client took a little longer than average to connect at 15 to 20 seconds, and it gave us several notifications about the startup process. We think it's good to be informed, but if the alerts get too much, you can turn them off in Settings.

We stress-tested the client by forcibly closing the OpenVPN.exe process, and it didn't appear to notice, telling us that we were still connected to the service. That's bad news, but as the client also blocked our internet access, there were no data leaks. The only real-world issue is a user might wonder what was going on, but turning the VPN off and on again would fix the problem.

There was more positive privacy news from our leak tests, as multiple testing sites showed AirVPN's Windows client had no DNS leaks.

Website unblocking performance was mixed. We couldn't access BBC iPlayer, but AirVPN did get us into some sites, including US YouTube, and two out of three of our test servers enabled accessing US Netflix.

Our speed tests ended the review on a positive note, with UK downloads averaging an excellent 65-66Mbbp, and the best US servers reaching 60Mbps. Performance tailed off for some of the more distant locations - Singapore and Japan averaged 15-20Mbps - but even these were fast enough for most tasks.

AirVPN is a likeable service – open, transparent, reasonably priced and with some speedy servers. Expert users will love its advanced settings and huge configurability, and the 3-day plan offers a convenient, low-priced way to try it out.