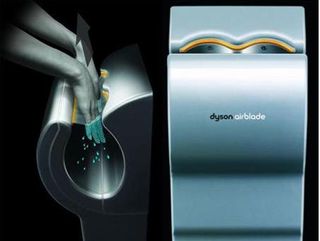 The Conservative Party has given vacuum cleaner and former wheelbarrow magnate Sir James Dyson the job of the UK's 'tech tsar', which involves heading a task force to boost Britain's high-tech exports.

Dyson, best known for his vacuum cleaners, awesome high-powered hand dryers and wheelbarrows with balls on, will hopefully help David Cameron's party to improve the perception of the UK's technology industries on the world stage.

Shadow Business Secretary Ken Clarke slammed the Labour government, claiming that they "have failed to encourage private sector investment in new technologies", adding that the Tories "will look at ways to unlock the talent in our universities and allow a new generation of hi-tech exporters to flourish".

While 39 per cent of all private equity investments in the States goes to start-ups, the same figure for the UK is a measly 4 per cent.

Dyson argues that the UK needs "to awaken our creativity and competitive spirit… if we nurture the next generation of scientists and engineers then Britain could become Europe's hi-tech capital".

Via The Daily Telegraph