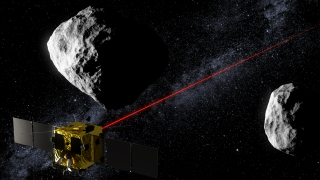 Space agencies across the world marked World Asteroid Day on 30 June by releasing details of their plans to protect the human race from a dinosaur-extinction scenaro.

The European Space Agency put out a video showing off its proposed Asteroid Impact Mission, which aims to deflect an asteroid with a "kinetic impactor" - a big projectile that knocks an space rock off its course, like a pool ball.

As well as defence, it's possible that we might be able to use the same technology to capture platinum-rich asteroids and make them available for mining - paying for the cost of the mission many times over.

Meanwhile, the American Museum of Natural History released a video of their own, detailing several other asteroid-deflection proposals. It includes breaking asteroids into smaller pieces and directing smaller space rocks into the ocean. Go watch: