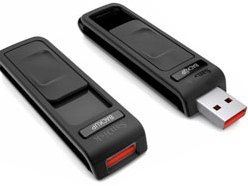 SanDisk has announced two new additions to its range of USB flash drives – including the Ultra drive which can back up files at the touch of a button.

According to SanDisk the Ultra Backup (with versions up to 64GB), allows one touch backup and puts that 'special' data behind AES encryption and password protection.

Also on the receiving end of a 'contemporary new look' is the SanDisk Cruzer USB flash drive.

Offering up to 32GB of storage – the Cruzer (and the UItra Backup for that matter) have been styled by frog design (note the lack of capital letters that denotes an arty company).

"Signature design elements include juxtaposed L shapes that create a dynamic, yet balanced, composition, a bright red USB connector and a simple cap-less design, which exposes the USB connector for use via a dynamic sliding mechanism," says the press release.

"When plugged in to a host device, a glowing, amber-coloured LED light alerts users that the drives are ready for reading or writing data."