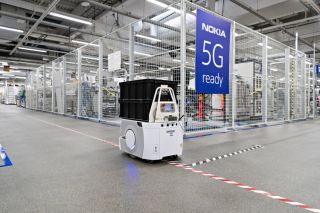 Nokia says it has agreed 42 commercial 5G deals and has reiterated its belief it is the only choice for mobile operators wanting a one-stop-shop for telecoms equipment.

The Finnish giant is competing with Swedish rival Ericsson and beleaguered Huawei for business as operators continue to rollout their 5G services. Samsung, too, is emerging as a significant player in the market.

It claims its proven track record with 4G has inspired confidence in customers, as does its complete portfolio of core network and radio technologies. Nokia also places particular emphasis on its optical networking and software capabilities.

The company secured its 30th deal in March and has added a major deal every week since.

Including its commercial arrangements, which include T-Mobile, Telia and SoftBank, Nokia says it has concluded more than 100 customer engagements to date. That figure also includes trials and demos. Nokia itself is a 5G customer, with next-generation networks used to aid production in its Oulu factory.

“The pace of 5G progress is accelerating across the globe. We are delivering significant performance increases to operators and the power of Nokia’s end-to-end portfolio is being recognized,” boasted Nokia CEO Rajeev Suri.

“In fact, in pretty much every network where Nokia products are deployed, we are the performance leader. Here and now - at the beginning of one of the most radical technology transitions ever with 4G giving way to 5G - this is Nokia’s time to shine.”

Nokia had previously said it expected “staggered” demand for 5G kit, with the second half of 2019 likely to much more impressive than the first.

It is currently nearing the end of a cost-cutting exercise as it seeks to save €700 million, with another wave of job cuts announced earlier this year.

Huawei has previously boasted of securing more than 40 5G contracts.