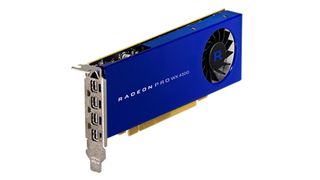 AMD has announced the imminent availability of its new Polaris-based Radeon Pro WX cards (which replace the FirePro brand aimed at pro users).

There are three offerings in the Radeon Pro WX series which is targeted at workstations, and AMD claims they offer plenty of oomph alongside power efficiency – cool and quiet operation – with future-proofing in the form of DisplayPort 1.4 tech that enables them to drive a 5K HDR display.

The base model is the WX 4100 which is a half-height graphics card that can fit into small form factor workstations. It offers 16 compute units (1024 stream processors), 4GB of GDDR5 video RAM, and 2TFlops in terms of compute performance – which AMD notes is around two-and-a-half times faster than competing cards in its price bracket (while still offering the same energy consumption).

All of these graphics cards come with AMD’s VIP customer support (24/7), along with a three-year warranty, and an option on a seven-year extended warranty should you wish for more insurance against anything going wrong with the hardware.