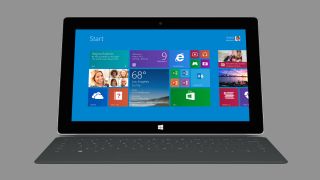 Surface 2 is about "bringing all of Microsoft to life," Surface vice president Panos Panay said at its launch. That should make it one of the first examples of the 'one Microsoft principle' from the recent reorganisation.

The company is bundling Skype and SkyDrive in with the price of a Surface 2 to make the tablet more useful. This chimes with comments made by Terry Myerson, the new head of Microsoft's OS group, at last week's financial analyst meeting.

"All of our devices are becoming more cloud-powered," said Myerson. Similar to bundling Xbox Live with Office 365 and Bing on cheap Nokia featurephones, it's also a chance to get you hooked on Microsoft services.

In the same discussion, Julie Larson-Green, who runs the devices and services group, said the initial release of Surface taught them that "you need to have balance to be successful in the market - you need to have the combination of great hardware, great software, apps and services in order to win."

Microsoft is hoping that Surface will be more like Xbox than the failed Zune music player and service. Xbox had a slow start against the big players in the console market ("when the first Xbox came out it had hardly any games, it took a while for us to get going with it," Larson-Green pointed out). But it's the mix of hardware, software, apps (from Microsoft and others) and services like Xbox Live that Microsoft wants to get on Surface and Windows Phone.

When we asked Larson-Green at the Surface 2 launch what's special in Windows 8.1 for the new Surface, she was quick to emphasise the mix of hardware, software and services. "I think 8.1 is a great update for all PCs, but then the special things we did working together [with other Microsoft teams] really bring to life the capabilities of Surface 2," she said.

"The power in the Surface device to run the Halo games and the full Office suite at the same time, snapped side by side, the low-light camera working with Skype [to adjust exposure automatically]… We spent a lot of time working across software and services with the devices team to make sure it all comes together in a seamless package."