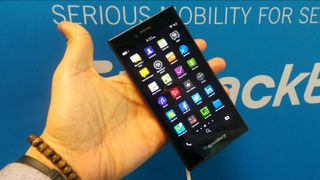 Updated: Vodafone has confirmed that the Leap will be come to its portfolio soon but only for business customers.

BlackBerry has pulled back the curtain on a new mainstream smartphone, the Leap, at MWC 2015.

According to the mobile maker's CEO John Chen, BlackBerry will target young mobile professionals - a key segment that is still eluding the Canadian phone maker - with the 5-inch device.

It comes with 4G functionality, an edge-to-edge HD display, BlackBerry's signature keyboard and a rather eye-catching 25-hour battery life thanks to its 2,800mAh battery.

Other features include a textured back, a Qualcomm SoC clocked at 1.5GHz, 16GB of storage, 2GB of RAM, an 8MP rear camera capable of recording at 1080p, BlackBerry 10.3.1 OS plus BlackBerry's own assortment of applications including Blend, Assistant and Hub.

BlackBerry aficionados will probably remember that the Z10, which launched more than two years ago, had exactly the same hardware (bar the lack of NFC and a bigger battery).

Chen reiterated BlackBerry's commitment to make more money out of its smartphones after the division started to generate meaningful revenue for the company.