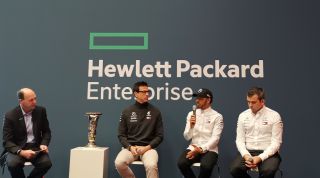 Weeks after Lewis Hamilton wrapped up this year’s Formula 1 World Championship, his Mercedes F1 team is already hard at work on developing what it hopes will be another world-beater next year, and is calling on some high-powered technology to help with this.

Earlier this year, Mercedes F1 announced a multi-year technological partnership with HPE aimed at harnessing the latter’s expertise as an official team partner across a number of areas to keep pushing for victory.

At the latter’s HPE Discover event in Madrid last week, Mercedes F1 head of IT Matt Harris and CEO Toto Wolff went into more detail about the partnership, with the world champion himself also giving his opinion on how technology is affecting his work.

Formula 1 is a sport that advances and evolves rapidly across the course of a season, with Hamilton noting that the car which ends the season will on average be two seconds a lap faster than the one that started the year, thanks to the incredible cycle of development and upgrades from the team.

And with track testing time heavily restricted by the sport’s governing body, the importance of detailed simulations, as well as maximising the amount of data gathered from any testing, is greater than ever.

“Formula 1 is about the intersection between human performance and science,” Wolff noted, “(and) merging the two is not trivial.”

“Formula 1 has always been very much data-driven, there's no such thing as an instinctive decision,” he added, the analysis of data has crept into every single area.”

So how is HPE helping support Mercedes in its development? Harris described the two companies had in fact been working together for 18 months before making the partnership official this season at both the team’s factory in Brackley as well as trackside.

He noted how the team is using HPE’s Apollo 6500 high-performance computing system within the on-site data centre at Brackley to run a huge number of complex race simulations.

This takes the amount of time needed for such calculations from three days down to just one, with Harris mentioning other workloads that have been cut from four weeks to a single day.

“That’s a massive difference,” he noted.

HPE also has two full-time employees, a data scientist and technical advisor embedded within Mercedes F1 headquarters, making sure the team get the most out its tech.

The team are also harnessing HPE’s expertise in the growing field of edge computing by utilising its Edgeline systems, allowing capturing of data from the track or at the factory that can quickly be sent for analysis.

It is also examining how compute power can be used to support its work in machine learning. Harris admitted that both he and senior members of the team had been sceptical about how much they could do with machine learning, but the effect it has had on assisting with analytics is making a huge difference,

“This is a first for us,” he noted, “the computers is now finding things that a human cannot.”

HPE has also provided the team with a number of ruggedised devices that can be at home in the pit garage wherever they are in the world, from the heat of Abu Dhabi to the humidity of Singapore or closer to home at (the inevitably rainy and windy) Silverstone.

Mercedes F1 are also utilising advisory services from HPE Pointnext, as well as a number of software solutions all aimed at improving efficiency and cutting off the extra hundredth of a second that could be the difference between victory and second place.

“This makes sure IT is out of the way, so Lewis doesn’t have to worry about it”, Harris laughed.

With the start of the 2019 season only three months away, Mercedes F1 is keen to continue its dominance of the sport, and HPE technology could be key to ensuring this.

"We're not very different any other company,” Harris noted, “the work we’re doing is similar to many other industries...we’re just working at a much faster cadence!”