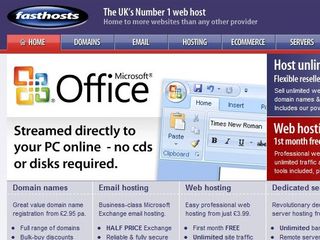 Fasthosts is offering Office 2007 online for £7.99 per month

Fasthosts has denied it has done anything wrong by announcing a £6 per month streaming deal for Office 2007, despite

claims to the contrary

. Fasthosts said this in a statement sent to us this evening:

"Fasthosts launched its Office 2007 streaming service this month after having worked with its software industry streaming partners over a period of several months since last year.

"Fasthosts went live with this service in the knowledge that such an offering would be compatible with the [Service Provider Licensing Agreement] SPLA after it was confirmed, via its streaming partners, that approval had been made by Microsoft for such services to be streamed under the SPLA.

"Fasthosts has understood, and has had confirmed to it, that the facilitation of this approval is through the production of an addendum to the current SPLA, a decision confirmed in meetings between Microsoft European SPLA Division and a Fasthosts' software streaming partner in January of this year.

"Fasthosts and Fasthosts' partners have therefore worked with the European and Worldwide SPLA teams in getting approval for this service prior to launch, in order to bring this innovative new offering to market.

"Fasthosts has not been contacted by anyone from the Microsoft Anti-Piracy team."