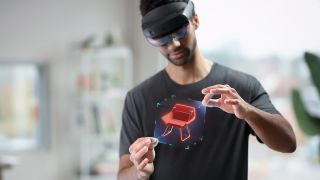 UPDATE: A Microsoft spokesperson told TechRadar Pro that “As we announced in February, Microsoft HoloLens 2 will begin shipping later this year. We have started collecting expressions of interest for HoloLens 2 preorders and, as part of our standard practice for gathering feedback, have shared near-final prototypes with some customers, but have not announced a date for general availability.”

The next edition of Microsoft's augmented and virtual reality headset, HoloLens 2 will go on sale as early as next month, a company executive has suggested.

Speaking at the World Artificial Intelligence Conference in Shanghai, Microsoft's head of AI and research, Harry Shum, said a launch was coming soon.

HoloLens 2 was unveiled by Microsot back at Mobile World Congress in February, but the company had not disclosed any information about release dates until now - although there's still no exact date or pricing information available.

In the six months since MWC, Microsoft has remained fairly tight-lipped about its plans for HoloLens 2, preferring to concentrate on fine-tuning the device that was shown off in Barcelona by CEO Satya Nadella.

The company did open pre-orders for HoloLens back in May at its Microsoft Build conference, as well as revealing a HoloLens 2 Development Edition to help developers get a head-start on creating news apps and services for the device.

The Development Edition does not include any special hardware or different features from the retail version of the HoloLens 2 but instead includes $500 in Azure credits as well as a three-month trial of Unity Pro and Unity PiXYZ plugin to help bring engineering renderings into Unity.

Much like its predecessor, HoloLens 2 will look to target businesses and enterprise customers, and features both a lighter build and improved hardware.

This includes an upgraded view system, with Microsoft employing a 2K MEMS (or microelectromechanical systems) display to allow a larger field of view that is now 52-degrees, beating the original’s 34-degree option. It’s also no longer in a 16:9 aspect ratio, allowing your augmented reality view to be taller.

Microsoft also revealed that Unreal Engine 4 support for HoloLens 2 will be available by the end of May, potentially meaning greater gaming and VR support.

Microsoft is also opening an open app store, allowing developers to create their own marketplaces for content, and will support all web browsers - not just Edge. Firefox is the first big partner to sign up, with its new browser offering available on HoloLens 2.