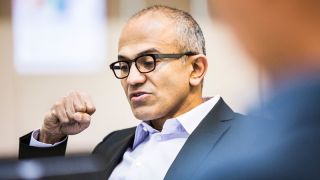 The declines were partly the result of a $1.66 billion (about £9.8b, AU$17.9b) lift from deferred revenue in the comparable quarter last year, according to The New York Times. The deferred revenue was related to promotional offers Microsoft extended to customers buying new versions of Windows, Office and other products. Without that money, Microsoft's revenue grew 8% and net income grew 5%.

"This quarter's results demonstrate the strength of our business, as well as the opportunities we see in a mobile-first, cloud-first world," said Satya Nadella, in his first earnings statement as Microsoft CEO.

"The past two and a half months have been a period of significant change. In the months ahead we will be focused on two things: rock solid execution and moving the company forward," he added during an investors call.

Bing US search share grew to 18.6% of the market, while search advertising revenue grew 38%. The company's devices and consumer revenue increased 12% to $8.3 billion (about £4.9b, AU$8.9b) overall, compared with Q3 last year, due in large part to Windows OEM revenue, which increased 4%.

"Our SQL Server business grew double-digits again this quarter, and with the announcements of SQL 2014 and Power BI for Office 365, we offer a unique, comprehensive, end-to-end data and analytics solution," said Kevin Turner, COO at Microsoft.

Microsoft expects to close the acquisition of the Nokia Devices and Services business on April 25, the company said in its earnings statement.

In March, the company introduced Microsoft Office for iPad and Microsoft's new Enterprise Mobility Suite, which includes a series of tools designed to make it easier for IT departments to manage mobile devices and protect sensitive data.

In February, Nadella was named the third CEO of Microsoft, succeeding Steve Ballmer and Bill Gates.