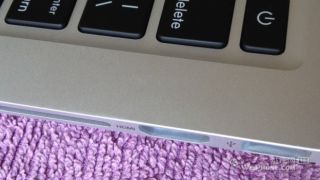 Is this the MacBook Pro 13-inch with Retina display?

The ongoing saga surrounding the rumoured 13-inch Retina MacBook Pro got a little more interesting this weekend with the arrival of some leaked photos.

Speculation have been rife, these past few weeks, that Apple will bestow the ultra-high resolution display upon the smaller MacBook Pro model, following the launch of the 15-inch notebook earlier this year.

Now purported photos have appeared on the WeiPhones.com forums showing a smaller body and a screen resolution of 2566 x 1600, evidenced by a screenshot, which is the same as the 15-inch model.

The body differs from the 15-inch model, as there are no speakers either side of the keyboard and the side ports are aligned differently with the keys.

The new pictures also show the presence of a HDMI port (unlike the current 13-inch MBP models) and two Thunderbolt ports.

While these photos do seem to all-but-confirm the existence of the 13-inch super hi-res model, the question now is whether it'll be presented at the iPad mini launch on Tuesday?