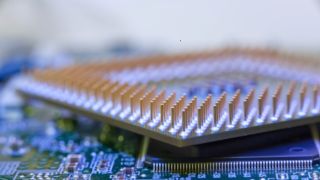 IBM's chip unit gets scooped up by a semiconductor company

IBM is reportedly nearing a deal to sell its chip-making unit to GlobalFoundries, according to reports. GlobalFoundries seeks to acquire IBM's engineers and intellectual property in the deal.

IBM currently loses $1.5 billion (£900 million, $1.70 billion) on its chipmaking business each year, according to a Bloomberg report. In April, IBM asked potential bidders for $2 billion (about £1.2 billion, AU$2.28 billion) a year, but received bids closer to $1 billion (£607 million, $1.14 billion). It is unclear how much GlobalFoundries paid for the chipmaking unit.

GlobalFoundries was founded in 2009 after the government of Abu Dhabi purchased the manufacturing facilities of Advanced Micro Devices. The company, which is based in Santa Clara, California, and specializes in the creation of semiconductors, employs more than 13,000 and generates annual revenues of more than $4.5 billion (about £3.0 billion, AU$5.5 billion).

IBM recently sold its x86 server business to China's Lenovo Group for $2.3 billion (about £1.39 billion, or AU$2.62 billion). At the time, IBM said it was making the move to focus more on its big data and cloud offerings.

Earlier today, IBM announced that its 15 new international cloud-focused data centers will be created in order to meet US federal security requirements. The first of the new data centers is scheduled to open in Dallas in June. The announcement comes as part of IBM's plan to commit $1.2 billion (£730 million, AU$ 1.36 billion) to expanding its global cloud footprint through an increased network of data centers back in January.

IBM acquired database-as-a-service provider Cloudant to enhance its position in big data and analytics, cloud computing and mobile. It also acquired Aspera in December in order to increase its file transfer capabilities.

IBM is reportedly looking to sell its software-defined networking business for $1 billion.