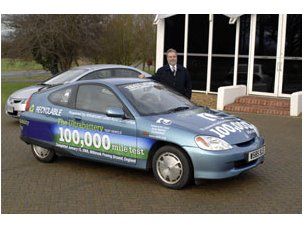 A new type of lithium ion battery has been developed that can store much more charge than current technologies.

Lithium ion rechargeables power many of today's mobile gadgets, from the smallest phones and MP3 players to full-size electric cars.

However, batteries are limited by the relatively small capacity of the graphite anode in these batteries to absorb lithium ions.

The new technology, developed by a team at Hanyang University in South Korea, replaces the graphite anode with one made of porous silicon.

Silicon can store more lithium ions - and thus more charge - than graphite, but previous silicon-based batteries had a very short lifespan: just a couple of charges before the delicate silicon anodes crumbled.

This highly porous structure makes possible a high capacity lithium ion battery that can be charged and discharged extremely rapidly - a huge advantage for electric car batteries. It also has a lifetime of hundreds of cycles.

But don't recycle your rechargeables just yet - the technology is unlikely to find its way into motors for a couple of years.