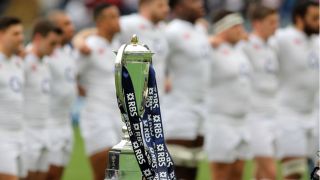 As the Six Nations 2020 gears up to kick off this weekend, millions of fans across the world will be tuning in to cheer on their country.

But this year's tournament will also feature a more in-depth way for fans to interact with the game than ever before thanks to the Six Nations' partnership with Amazon Web Services (AWS).

The computing giant is set to expand the statistics and insights it provides to viewers everywhere, but also to broadcasters and even coaches as they push to get that extra edge over their rivals.

“The Six Nations is another one of those kind of customers that want to use the technology that we offer to provide better insights," Steve Bryen, AWS Senior Technical Evangelist told TechRadar Pro at the official Six Nations 2020 launch in London recently.

This is the second year of the partnership between AWS and the Six Nations, with the initial seven insights being expanded to twelve for the 2020 tournament.

The new statistics include the likes of heat maps to show where on the pitch the action is taking place, metrics on rucking efficiency, numbers concerning balls won, impactful tackles, and crucial line breaks.

"The great thing about this is that it puts more stats and insight into the hands of a broad spectrum of fans," Bryen says, “I think we should see a significant improvement through technology for the fan experience."

AWS has gained plaudits for its work with Formula 1 and the NFL, giving viewers extra insight into what can be some of the trickest parts of the sport to understand, even for long-standing fans.

The data itself is gathering by a seperate company, StatsPerform, which gathers the information in real-time through a custom platform built on AWS EC2, with the data then put into a data lake hosted on Amazon S3.

Tools including Amazon Elastic MapReduce and Amazon SageMaker are then used to harness machine learning and analytics to get detailed insight into that data, creating analytics that can then be shared in real time for live broadcast to viewers in over 170 countries to enjoy.

For example, to power the new Kick Predictor statistics tool, the AWS Machine Learning Solutions Lab team worked with StatsPerform to analyse a wealth of historic data to train a machine learning using Amazon SageMaker to predict if a conversion or penalty kick will be successful.

The company has worked with England rugby legend Will Carling to fine-tune its insights, which helped the AWS team gain first-hand experience as to what information is the most useful.

"Rugby gets credibility from working with a company like AWS...I think it’s the sort of company that rugby should be getting involved in," Carling says.

“In terms of data, I think it’ll bring great insights for fans...from new fans to the old harcore, it’ll give insights into the game that they’ve never had before."

But Carling adds that the technology could also help the teams themselves, especially as the mantra of "mariginal gains" first expounded in Team Sky's cycling roster, expands to other sports.

"I think everything is about marginal gains, whether that’s in skills, or in fitness or organisation," Carling notes. "It's what they're all looking for, it just gives them insights and tells a story which they can build gameplans and tactics around."

And Carling warns that rugby need to utilise technology to help attract new fans, as the new data can help not only explain the game, but also give colour, depth, and insight. The chequered introduction of VAR in football has shone a light on the relationship between sport and technology, with Carling noting that getting the right buy-in is "crucial" to bettering the fan experience.