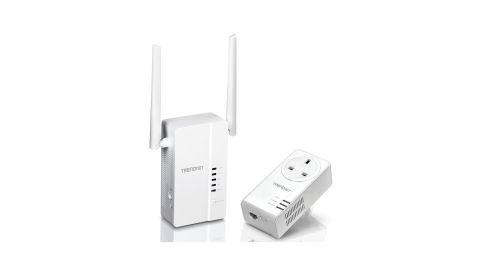 Trendnet has always offered great value with its wireless and powerline products, but often the company has avoided the higher specification devices. However, its latest hardware bucks that trend, combining the best in powerline and wireless technologies, yet still priced to remain competitive.

Is the kit a good way to save money, and can it deliver on all the claims made on the box?

At the time of writing you can buy the TPL-421E powerline adapter independently for $39.99 (£43.99), and Trendnet promises that the Powerline Wi-Fi access point (TPL-430AP) will also be available to buy for those with existing powerline gear. However, there is no separate price for the latter module at this time.

Overall, this solution is marginally cheaper than the market-leading Devolo 9392 kit, though that unit has through power on both parts, not just the broadband router end.

Compared with some rival hardware, Trendnet equipment has lacked on the styling front occasionally.

That said, compared with the firm’s past attempts, the Wi-Fi Everywhere Powerline 1200 AV2 Wireless Kit is rather pleasing if a little mismatched between the two components.

Each has a similar theme, yet they don’t appear to have been created by the same design team.

The wireless part of the pair, TPL-430AP, exhibits an uncanny resemblance to the Asus 1200Mbps AV2 1200 Wi-Fi Powerline Adapter (PL-AC56), whereas the TPL-421E’s inspiration came from elsewhere.

What highlights the differences is that while both are clad in white plastic, for some reason the TPL-421E module has a glossy finish on it, whereas the TPL-430AP wireless part has a textured satin finish.

The difference isn’t a big problem, as they’re usually never seen alongside each other anyway, but one of these items is clearly due a visual revamp.

So how does it work? At one end of this network is the TPL-421E, a Gigabit LAN to powerline adapter, and at the other is the TPL-430AP that takes the powerline network and distributes it over three Gigabit Ethernet ports and an ac1200 class Wi-Fi access point.

Getting the hardware to communicate is relatively straightforward, assuming that the building you are in has a common ring main for all wall sockets. In modern buildings this is common, but older properties can be problematic in this respect.

The TPL-421E is meant to go in the wall socket that the broadband router uses, providing through power for that device and also connecting directly to it with a short Ethernet cable (which is included).

Once this part is connected and powered the TPL-430AP can be taken into another room and placed in a wall socket. After the ‘sync’ buttons are pressed on each adapter, a network should be established over the electrical cabling.

There are only two reasons that this might not work as advertised. The first, as mentioned, is that some older properties could have a separate ring main for each floor.

The other potential gremlin is that there could be something, like an industrial winch motor for example, that is connected to the same circuit creating excessive amounts of interference.

In a modern home, neither of these should be an issue, and we tested the UK version of this kit in a typical British house, with it working flawlessly. There are three versions: the United Kingdom Type G (BS 1363) model we tested, an EU European Type E/F Hybrid (CEE 7/7) model, and the North America Type B (NEMA 5–15).

Other than the different socket standards, they all have the same powerline and Wi-Fi capabilities and look practically identical.

The quoted performance is 1200 Megabits over powerline. That said, it’s important to accept that the 1200Mbit speed is theoretical, and the actual speed achieved will be significantly less.

Exactly how fast it goes is entirely dependent on the quality of mains wiring, the distance to cover, and the level of localized interference present. Typically we got about 300-400Mbits in the same room, 150Mbits between floors and 100Mbits further away.

Overall, it’s better than 100Mbit LAN, but not on par with Gigabit Ethernet. Although this is much easier to deploy, or indeed alter, and any devices connecting to the TPL-430AP by Ethernet cables can talk at full Gigabit speeds.

One nice touch on the TPL-430AP is a ‘Clone’ button that allows you to copy the existing SID and password from your router and then act as a Wi-Fi extender. Using this feature neatly avoids having to reprogram all your devices with the new Access Point, and should allow seamless connection as you move between locations.

There is also a button to disable Wi-Fi entirely, should you want to do that.

The Wi-Fi is both MIMO and beam-forming, and LEDs indicate if you’re connecting at 2.4GHz or 5GHz. The total 802.11ac bandwidth available is 866Mbps on 5GHz and 300Mbps at 2.4GHz. That’s sufficient to stream HD video to multiple clients without buffering issues.

There weren’t any great revelations performance-wise, and the hardware performed very much as we’d expected given the 1200 AV2 and 802.11ac capabilities.

The only catch – and this was also an issue with the Asus PL-AC56 – is that due to the width of the Wi-Fi module, on some older dual sockets the 78mm wide case might obscure the second socket.

Thankfully, the TPL-421E part doesn’t have this problem, because it’s thinner and has a built-in power socket to avoid requiring a free one to install.

It’s hard to complain about this kit from a functionality standpoint. It does what Trendnet claims in almost all respects.

The equipment is easy to deploy, as well as being straightforward to reconfigure. And, unless you live in a castle with original Victorian wiring, it should be a synch to create wired and wireless networking away from the router without punching holes and running network cables.

We’d prefer it if the kit was a little cheaper and the two elements matched more closely in aesthetic terms, but neither of those points makes this Trendnet solution a poor purchase.